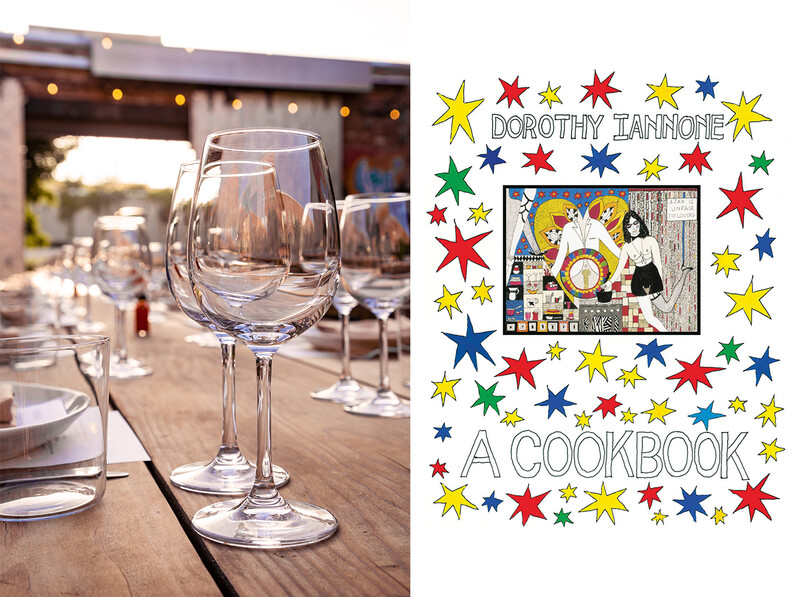 Salon Series in the Garden: Dorothy Iannone’s ‘A Cookbook’

Tickets to this event are $60. Price includes welcome beverage, conversation, and family style meal with a glass of wine. Space is limited, please book your place here.

‘Salon Series in the Garden’ is a distinctive dining experience, hosted by Hauser & Wirth Los Angeles and Manuela restaurant, for creative thinkers interested in the culinary and visual arts. Each salon brings together noted guest speakers to explore various topics pertaining to art, architecture, nature, food, and music.

About Dorothy Iannone & ‘Dorothy Iannone: A Cookbook’
Since the 1960s, Dorothy Iannone (born 1933) has aimed to represent ecstatic love and ‘the union of gender, feeling and pleasure.’ Today her oeuvre, encompassing paintings, drawings, collages, videos, sculptures, objects and artist’s books, is widely recognized as one of the most provocative and fruitful bodies of work in recent decades for its liberalization of female sexuality, politics and feminist issues.

Created in 1969, when she was living with Swiss artist, Dieter Roth, ‘Dorothy Iannone: A Cookbook’ is a perfect example of how Iannone mixes daily life, creativity and thought, culminating in her vision of cooking as an outlet for both eroticism and introspection. This publication is a facsimile of the 1969 original, now published by JRP|RINGIER a dust jacket specially designed by the artist.

Artbook will sell copies of ‘Dorothy Iannone: A Cookbook’ during the event.

Family Style Dinner by Chef Kris Tominaga
With a menu inspired by ‘Dorothy Iannone: A Cookbook’

About Evan Kleiman
Evan Kleiman is a true culinary multitasker. A voraciously curious chef, radio host, author, restaurateur and teacher, she has been called the “fairy godmother of the LA food scene,” but her reach extends to a community of cooks and eaters around the world who devour her weekly radio show and podcast “Good Food” on KCRW.

She spent 28 years as the chef and proprietor of Angeli Caffe, a Melrose Avenue trattoria where she was credited with reintroducing rustic Italian cooking to the United States. At Angeli she championed simple ingredients and economic ingenuity as a means to delicious and satisfying food, and went on to communicate her fuss-free approach in 8 cookbooks on Italian cooking.

Since taking the reins of Good Food in 1997, Evan has interviewed more than 6000 guests ranging from celebrated chefs and local farmers to historians and policymakers.

When her passion turned to pie in the summer of 2009, she wrote about her adventures making a pie every day for an entire summer on the Good Food Blog. What began as a summer project spawned the wildly popular annual Good Food Pie Contest, and catapulted Evan to the status of pie guru.

When she’s not cooking, eating or reading, Evan is an adjunct instructor in the Food Studies department at UCLA. She is passionate about regenerative agriculture and food justice and has served on the boards of Roots of Change, Los Angeles Food Policy Council, Food Forward and SEE-LA. She teaches a yearly pie camp at the John C Campbell folk school in North Carolina and regularly teaches pie classes in Los Angeles.

She has appeared in countless food television shows, including Jon Favreau and Roy Choi’s The Chef Show, where she demonstrates a peach galette. Her most exciting pop culture moment was when her apple pie recipe made a cameo on The Simpsons.

About Laura Fried
Laura Fried is a Los Angeles-based curator and is a co-founder and Director of Active Cultures, a nonprofit organization that explores the convergence of food and art in contemporary life. Through collaborative projects by cooks and artists, Active Cultures’ programming takes a multitude of forms, such as performances, workshops, meals, and education initiatives. Throughout her career, Fried has advocated for artists and institutions while pushing forward new models for engagement and exhibition making, and remains deeply committed to projects that are artist-centered and interdisciplinary. She recently served as founding Artistic Director of the Seattle Art Fair, for which she organized a comprehensive program of large-scale installations, performances, talks, and projects. Fried was previously on the curatorial staff of Massachusetts Museum of Contemporary Art, North Adams, MA, as well as a curator at the Contemporary Art Museum St. Louis, where she organized major exhibitions with artists Spencer Finch, Carey Young, Sean Landers, Stephen Prina, Elad Lassry, Manon de Boer, and Richard Aldrich, among others.

About Ben Kinmont
Ben Kinmont is an artist, publisher, and antiquarian bookseller living in Sebastopol, California. His work is concerned with the value structures surrounding an art practice and what happens when that practice is displaced into a non-art space. Since 1988 his work has been project-based with an interest in archiving and blurring the boundaries between artistic production, publishing, and curatorial practices.

In the past few years he has taught courses in the Social Practices Program at the California College of Arts as well as organized various workshops with students from the École des Beaux-Arts in France (Angers, Bordeaux, Bourges, and Valence), Cranbrook Academy in the US, and the Rietveld Academy in Holland. Exhibitions include those at Air de Paris, MAXXI (Rome), Whitney Biennial 2014, ICA (London), CNEAI (Chatou), Kadist Art Foundation (Paris & San Francisco), the 25th International Biennial of Graphic Arts (Ljubljana), the Frac Languedoc-Roussillon (Montpellier), Documenta 11 (Kassel), Les Abattoirs (Toulouse), the Pompidou, the San Francisco Museum of Modern Art, and a traveling survey show of Kinmont’s work entitled “Prospectus” (Amsterdam, Paris, New York, and San Francisco). He is also the founder of the Antinomian Press, a publishing enterprise which supports project art and ephemera (the archive of which is in the collection of drawings and prints at MOMA).