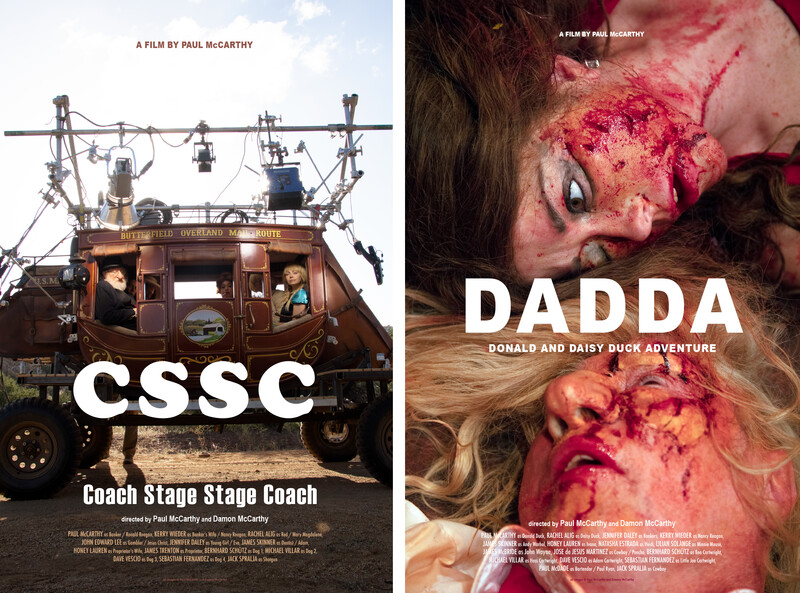 On Friday 15 February, Hauser & Wirth will present the world premiere of ‘CSSC – It Begins – The Coach The Skull’ and the US premiere of ‘DADDA – Poodle House Saloon’ – two new films by celebrated Los Angeles artist Paul McCarthy. Each film will be screened once for this special evening at The Montalbán Theater in Hollywood.

Please note these films are intended for audiences 18 years and over. Viewer discretion is advised.
Guests are welcome to attend one or both screenings.
Please select screening time(s) upon registration.
Click here to register.

About the films
Co-directed by Paul McCarthy and Damon McCarthy, conceived by Paul McCarthy and edited by Damon McCarthy, and created over the course of three years, the films are part of the larger project ‘Coach Stage Stage Coach / Donald and Daisy Duck Adventure (CSSC / DADDA),’ a multi-platform work loosely inspired by the classic 1939 film ‘Stagecoach’ starring John Wayne. ‘CSSC / DADDA’ is the newest project within Paul McCarthy’s acclaimed multidisciplinary practice that merges performance, sculpture, photography, painting, video, installation, and virtual reality. Themes of family, mass media, and the dissolution of societal structures sit at the center of a sprawling oeuvre that illuminates society’s double standards and hypocrisies.