Black Peace Strategies for the Future of Humankind: Dedicated to Lorna Simpson 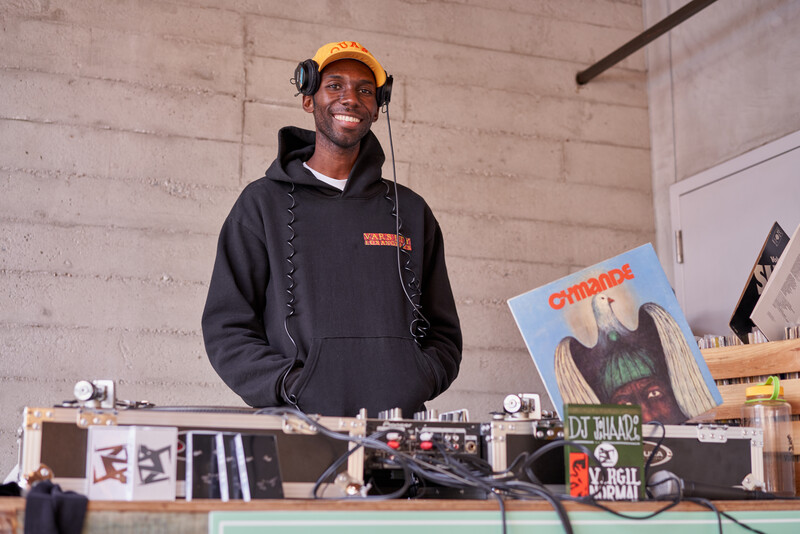 Lorna’s work resonates very closely with something in me. I was trying to figure out how I could put that feeling into music, almost like an ‘applause’ for her work.

When I’m playing, I’m coming from more of an abstract space and then subtly bringing in music that people are familiar with. Lorna seems very cool about her work. It’s very subtle, but what she creates is a familiar space, something like maybe a person you’ve seen before walking down the street.

This mix has to do with abstract subtlety in the familiar. I don’t know if I’ve ever said those words together! You’ll get the best feeling if you play all this stuff really loud. 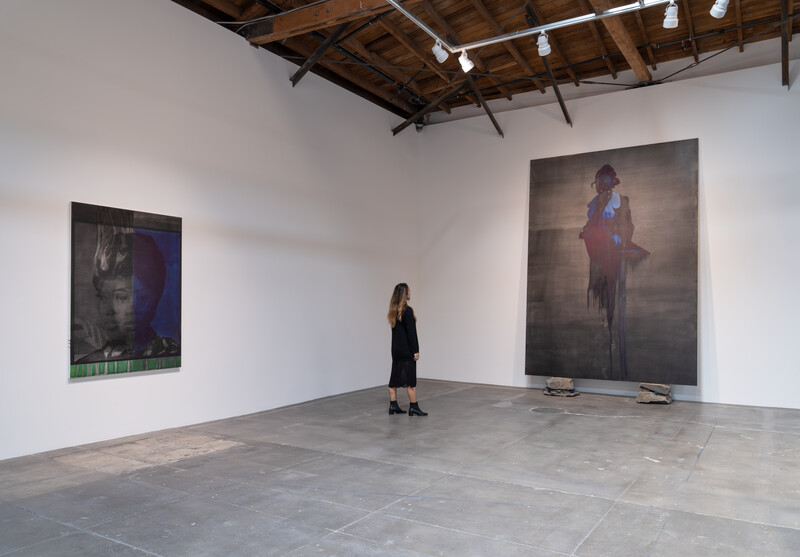 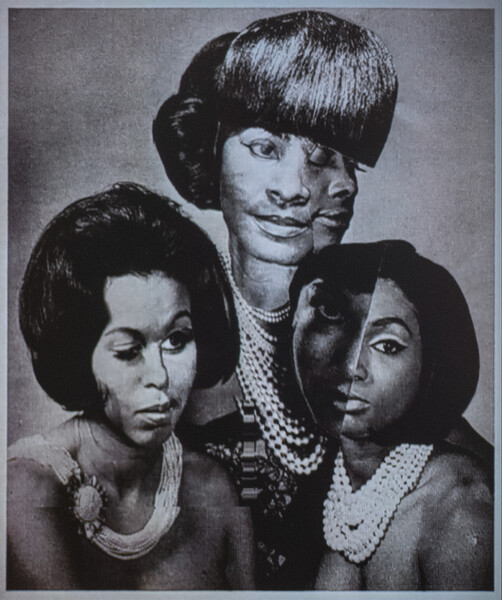 This is ‘The Land of Mu’ from Charles Earland’s album ‘The Great Pyramid’. When I’m DJing I’m trying to portray the idea that you’re being hugged by the music, and this song is on the same frequency as Lorna’s sound bowls in the courtyard. (Simpson’s work ‘Stacked Stones/Vibrating Cycles’ [2021] includes obsidian singing bowls that can be sounded with mallets.)

Lonnie Liston Smith’s song ‘A Chance for Peace’ from his album ‘Visions of a New World’ is just a groovy, funky sound. I picked it for the name.

I chose Anita Baker’s ‘Giving You the Best That I Got’ because it’s like Lorna saying ‘Listen, this is my body of work. It’ll continue to grow, but not for you, for me.’ This song reminds me of those deep blue and heavy iceberg paintings of Lorna’s.

Yussef Kamaal’s ‘Black Focus’ is an instrumental, and it reminded me of Lorna’s video piece in the first room (‘Walk with me,’ [2020]) and what could be playing underneath it. It starts kind of slow with Kamaal Williams on keyboard. Yussef Dayes is a drummer so it builds into a really cool syncopated drum pattern. It’s almost eerie.

All those different women Lorna collaged into constellations, they’re like goddesses, just floating in space, comfortable almost. This song, ‘Another Life,’ from D’Angelo’s ‘Black Messiah,’ reminded me of those constellations and those collages. They’re familiar. Maybe you’ve met them or seen them in another life. 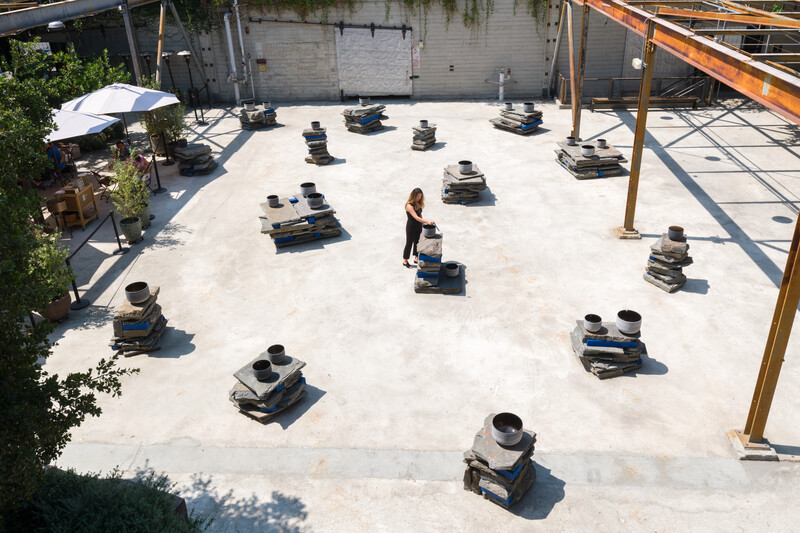 Song 6
This is The Sylvers, a great 1970s R&B group from Watts, and I chose ‘The Cry of the Dreamer’ from their 1973 album called ‘The Sylvers II’ because it has really cool lyrics. They say, ‘I’m tired of man’s crowded ways of life.’ Those words say to me: Let me be out here doing the things I need to do to make sure I have my sanity.

Song 7
This band is the great soul group The Whatnauts and the song is called ‘I’ll Erase Your Pain Away.’ Basically, the message is: Do what you need to do, don’t change. I’ll love you just the way you are. Just keep doing the things that make you happy, because obviously it’s working. You know? Like Lorna!

Song 8
This one is such a dope song. It’s Wayne Shorter with Milton Nascimento and is called ‘Ponta de Areia’. Lorna’s sound bowls sync perfectly together with this. It also reminded me of the old photos in that fourth room (Simpson’s installation ‘Above Head,’ [2021] which includes vintage photobooth portraits of Black subjects, gathered from flea markets and eBay). You wonder what all those people went through to get to that point, to take that photo. You want their lives to be amazing, but you don’t know.

Song 9
I’ve been playing this Johnny Hammond one a lot lately. The album is called ‘Gears,’ from 1975, and the song is ‘Lost On 23rd Street’. It’s like Lorna’s really tall painting in the first room (‘Zenith’ [2021]), where you can kind of see this girl who’s turning and the rest of her is draped in a waterfall or something. There’s so much movement in that painting.

Song 10
Grant Green is the dopest guitarist, and he takes you on a nice little groove with this cover. It’s called ‘Love on a Two Way Street.’ It’s tight and it also reminds me of the old photos, where everyone is having a good time. Maybe at the bar where they’re hanging out, Green’s band would be the one playing this great song. 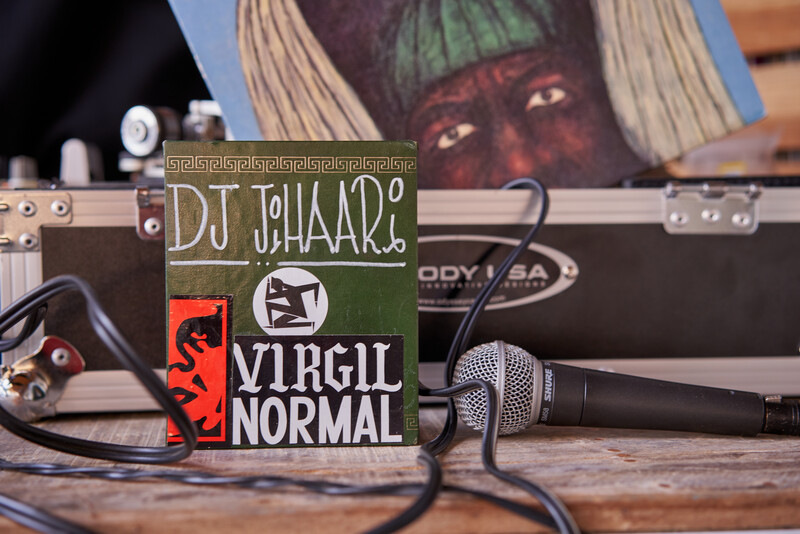 Song 11
This is Bobbi Humphrey and the name of the album is ‘Blacks and Blues,’ from 1973. This is one of my favorite albums. Every single song on here is a jam. Humphrey kills it with her flute. It’s almost like a heated conversation, the way she moves so smoothly through her melodies. She’s talking shit, I feel like. As if she’s saying, ‘I’m really good at this. I’m going to take it to this level you haven’t even heard yet.’

Song 12
Dexter Wansel is next, from his album ‘Life on Mars.’ This song is ‘Rings of Saturn’ and as the title suggests it has to do with space. There’s so much movement, like in those constellation collages. This song also feels a little sleazy, too. It’s very sexual. Maybe not sleazy, but definitely sexual. Hella sultry.

Song 13
Of course you have to have Aretha. This is from her great 1972 album ‘Young, Gifted and Black’ and the song is ‘Didn’t I (Blow Your Mind This Time)’ because with Lorna, every time she puts something out, that’s the question: ‘Didn’t I blow your mind, again?’

Song 14
Frank Ocean, ‘Blonde’ and the song is ‘Godspeed.’ When you’re going up into the cosmos, this is the song you want when you’re transcending.

Jihaari Terry (or DJ Jihaari) grew up in Oakland, CA, and lives and works in Los Angeles. He is an avid record collector, as he says, ‘of all things sampled by Madlib and J Dilla, whether it be funk, soul, house, or reggae.’ Jihaari adds: ‘I’ll definitely keep you on your toes wondering what I’m gonna play next. I play only vinyl and make sure to put the record sleeve up so you know who’s jammin’. Find me on Instagram @djjihaari.’