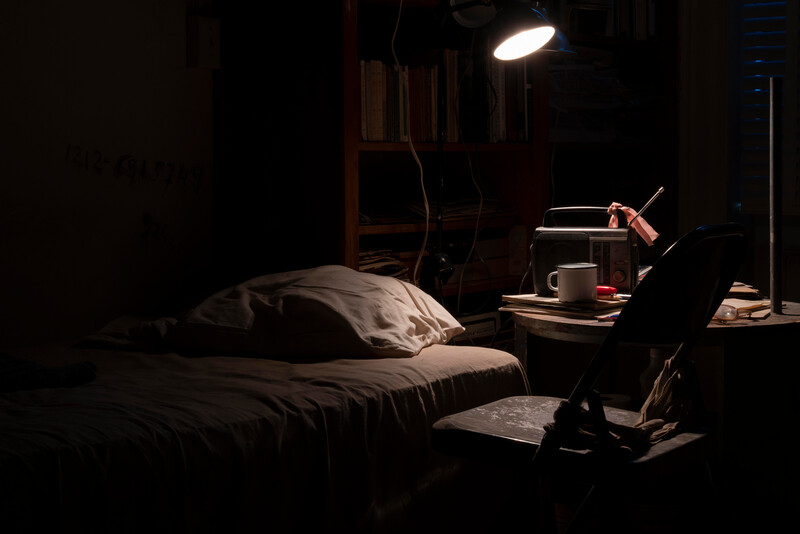 Memories haunt the insomniac. Interminable nights of wakefulness conspire with the past to bring forth long-forgotten events and their attendant emotions. Like phantoms, these recollections are nocturnal intruders; they emerge in the dark to plague those who cannot sleep. Jorge Luis Borges wrote what he called a metaphor of insomnia in the story ‘Funes the Memorious’ (1942) about a young man, Ireneo Funes, who, after a severe head injury, acquired the astonishing ability to remember every single detail of every single thing. Whether a blessing or a curse, this affliction filled Funes’ ever-expanding brain with a web of endless facts, theorems and observations. Today, we might equate such an occurrence with the Internet, but in Borges’ tale it conjures the restless intelligence of a sleepless mind. During the daytime, with its tasks, activities and inevitable interruptions, random thoughts are prioritized if not outright suppressed. At night, unmoored, they lay siege to the conscious intellect like an army of undead soldiers marching in unison.

For Louise Bourgeois—sculptor, storyteller, insomniac—memories comprise the tapestry of her art. They are the warp and the weft of her work’s underlying narrative—intertwined episodes of familial betrayal, loss and desire. During her sleepless nights, she countered the assault of reminiscences on her mind by drawing and writing, writing and drawing, in a kind of nightly exorcism that filled page after page with imagery and text. Like counting or breathing—recommended methods for calming the ever-awake—Bourgeois’ gestures on paper were grounded in repetition, akin to the recitation of words into the long hours of night: memory, metamorphosis, mutation, mutilation, murder, mockery, maleficence, malintent, malignancy, madness, maelstrom, maiden, mademoiselle, madame, magnitude, mandate, melancholy, meditation, metaphysics, melodrama, minutiae, miracle, mischief, mistake, mistress, morality, misunderstanding, monotony, modesty, mourning, morphology, mystery, mythology. Over time—as she endured ceaseless cycles of dusks to dawns—Bourgeois accumulated a paper lullaby, the score of which was composed from memories of unresolved conflicts and fleeting thoughts. 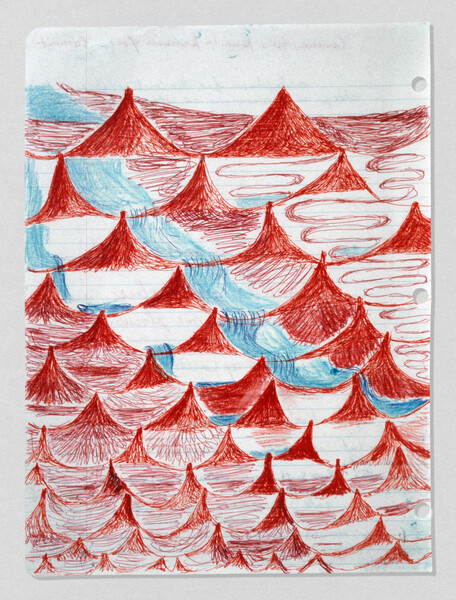 ‘In […] imaginary landscapes, dunes multiply to fill the expanse of the paper, transmogrifying into snow-capped mountains or dormant volcanos.’ 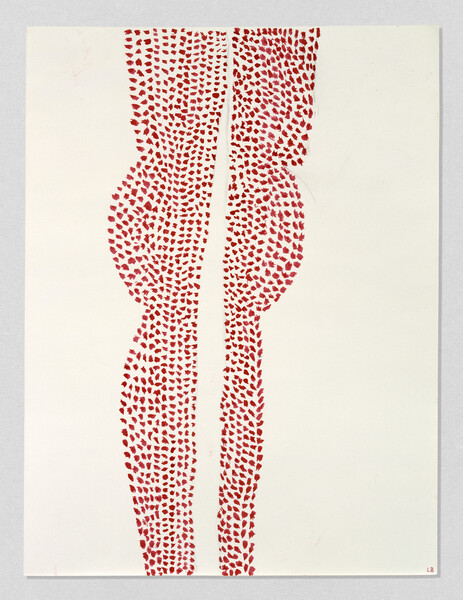 ‘Like counting or breathing […] Bourgeois’ gestures on paper were grounded in repetition, akin to the recitation of words into the long hours of night.’

During a particularly protracted period of wakefulness—from November 1994 until June of 1995—Bourgeois created 220 works on paper that were collated into a suite known as the ‘Insomnia Drawings.’ While insomnia was a lifelong affliction, it is possible that during this eight-month interlude she suffered from it more acutely. A glance at the chronology of her prodigious career shows that this was an intensely productive (and perhaps stressful) time for her. An expanded version of her solo exhibition conceived for the American Pavilion at the 1993 Venice Biennale—which inaugurated her wire-mesh ‘Cells’—traveled to the Brooklyn Museum as the first of numerous international venues. It was here that Bourgeois exhibited the first of her large-scale steel spiders, a monument to the memory of her mother. Her extraordinary, paired environments, ‘Red Room (Child)’ and ‘Red Room (Parents)’ (both 1994)—psychologically fraught interior spaces that investigate the psychosexual traumas of childhood—also premiered in an exhibition at the Peter Blum Gallery. And in the midst of such fruitful activity, two documentary films on her work commenced production. According to Jerry Gorovoy, Bourgeois’ longtime assistant, the myriad results of her nightly sketching, doodling, rendering, and writing were waiting for him when he arrived at her Chelsea home each morning.[1] It seems that the artist understood implicitly in the midst of her reparative, nocturnal exercises that she was creating something of consequence, something that should be witnessed and preserved. 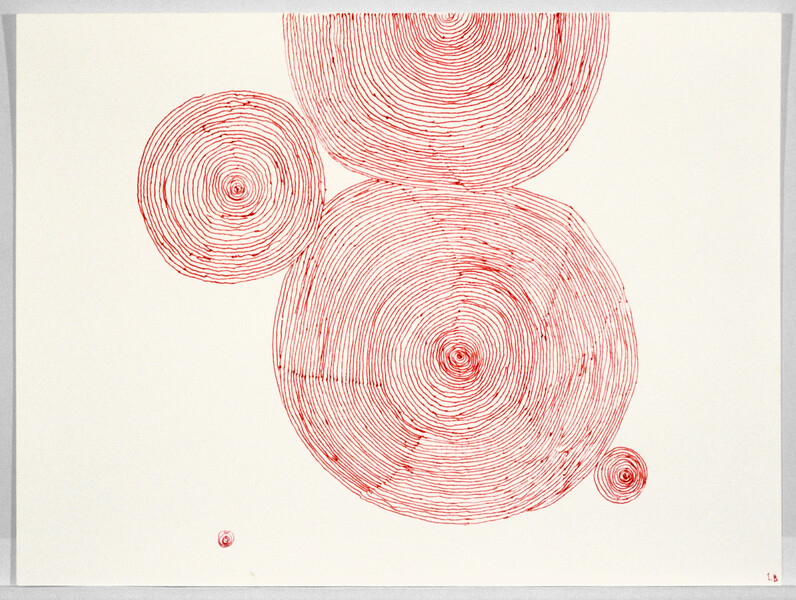 ‘This was drawing as a form of self-soothing, an act of mindfulness meant to quell the mental and emotional static often wrought by insomnia.’

The ‘Insomnia Drawings’ oscillate between abstraction and figuration—a dynamic tension that correlates with Bourgeois’ sculptural output. In page after page, she shifts effortlessly between realistic rendering and non-representational drawing. The former was in response to the memories that surfaced unfiltered in the night; the latter, as a way to quiet her thoughts. Do the distant landscapes populated with small houses emerge from recollections of the artist’s childhood home in Antony, France, where, beginning in 1919, her family’s tapestry restoration business was run? Their property encompassed a home, an atelier and a greenhouse; the Bièvre River—whose tannin was essential for dying the tapestries—ran through the grounds. Does the preponderance of flowers and plants throughout the drawings stem from the fact these grounds were filled with gardens? And did it often rain in this region, as suggested by the downpours depicted across a number of the river scenes? In other, more imaginary landscapes, dunes multiply to fill the expanse of the paper, transmogrifying into snow-capped mountains or dormant volcanos. Human figures also appear: female caryatids holding up an arch; people clasping each other’s feet to form a circular daisy chain; faces floating on an otherwise empty page. Random objects also make cameo appearances; sketches of shoes, paintbrushes, and ladders, for instance, are occasional notations in this nighttime diary. True to their form and content, the ‘Insomnia Drawings’ also include illustrations of circular clocks, two of which count out the full twenty-four diurnal hours utilized by all but eighteen countries around the world. In the case of Bourgeois’ timepieces, the hours represented are those in which she ostensibly remained awake, perhaps hearing them tick by like interminable metronomes of the mind. 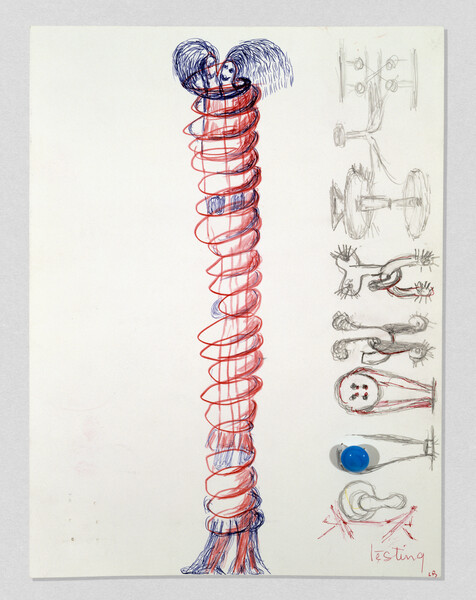 ‘Memories […] are the warp and the weft of her work’s underlying narrative—intertwined episodes of familial betrayal, loss and desire.’ 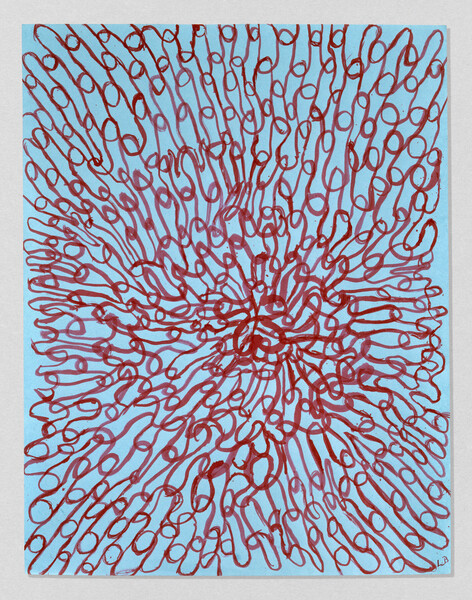 ‘Over time […] Bourgeois accumulated a paper lullaby, the score of which was composed from memories of unresolved conflicts and fleeting thoughts.’

Bourgeois’ abstractions evolved from the principle of repetition. Hypnotic webs of lines coil or unfurl depending on the sketch; in some, the lines replicate across the page in parallel syncopation or radiate outward in a recurrent geometry. Myriad dots cluster together in patterns across other pages to form what look like ribbons or banners or pathways. This was drawing as a form of self-soothing, an act of mindfulness meant to quell the mental and emotional static often wrought by insomnia. To create the individual pages, Bourgeois worked largely with her signature red and blue pens, punctuated by the occasional charcoal, gouache and watercolor on sheet music, cardboard or drawing paper—whatever was at hand in the middle of the night. In addition to the imagery she created, she wrote on almost every drawing, filling the verso (and sometimes recto) with notations, observations, poems, or lists. An anti-dream journal, the ‘Insomnia Drawings’ capture the artist’s meandering but conscious thoughts, her daydreaming until dawn. Bourgeois kept journals continuously from her childhood, recording experiences, personal revelations and ideas. This new cycle of 220 pages was an extension of such habitual writing, perhaps with the added freedom of text being largely untethered from the events of the day. Because Bourgeois’ memories sprung mostly from her youth in France, the primary language she wrote in at night was French, in which she played word games, made alliterated lists, jotted down side notes and reminders, and penned brief poems. English appears sporadically, sometimes side by side with the French. For instance, on the verso of a drawing created on December 25, 1994 (the artist’s birthday), showing tall flowers growing out of a watery landscape, she wrote:


night: watch for emerging emotions, hard to
spot out, wait and breathe right.

Returning to this unsettled and unsettling body of work in pandemic times makes palpable sense. Who hasn’t endured sleepless nights worrying about the health of loved ones, wondering what the future may hold? With interminable lockdowns and recurring tides of viral assault, time seems to have melted, the edges of days blurred and normal sleep cycles disrupted. The stress of the unknown is a painful stimulant. The parallel with Bourgeois’ personal history runs deep. Soon after the first World War, her beloved mother contracted the Spanish Flu, the pandemic that began to sweep the world in 1918, killing at least 50 million people. While she didn’t die from the severe respiratory illness she contracted, Joséphine (Fauriaux) Bourgeois never fully recovered. Her affliction was catastrophic to the young artist, who would eventually put her education on hold in order to care for her mother. Joséphine’s illness marks the beginning of the familial unraveling that would become the psychic bedrock of Bourgeois’ lifelong artistic production. In 1922, a young English tutor, Sadie Gordon Richmond, joined the Bourgeois household and for much of the next decade also served as Louis Bourgeois’ mistress. The artist’s resentment of her father for this domestic betrayal is a well-known fact, pervading her sculptures, installations, drawings and writings. But its connection to illness and quarantine and convalescence is more muted. The ‘Insomnia Drawings,’ as experienced in the time of Covid, expose a thread that sutures contagion, infidelity, memory and anxiety together in a form that continues to resonate today, perhaps all too forcefully. 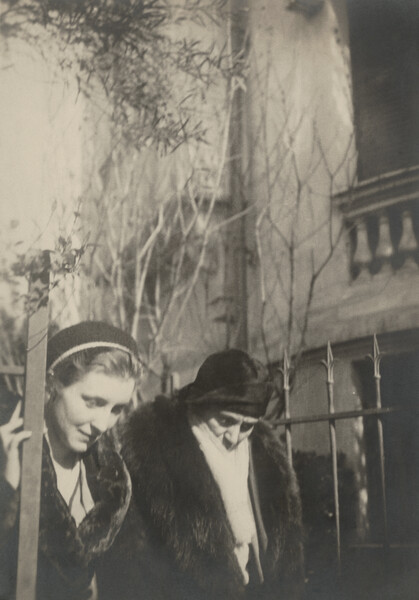 Louise Bourgeois with her mother, Joséphine, at the Villa Pompeiana in Cimiez, Nice, 1932. Joséphine passed away September of this year.

All Images are © The Easton Foundation/Licensed by VAGA at Artists Rights Society (ARS), NY, and cannot be used in any format without obtaining permission.

Nancy Spector is an independent curator who organized Louise Bourgeois’ retrospective at the Guggenheim Museum in 2008.