Frank Bowling’s painting practice is a tale of two cities: for the last 50 years, the artist has continually reinvented abstraction on the painted plane with one foot in London and one in New York, keepings studios in both cities at different times.

Bowling’s physical and artistic transatlantic journeys are the focus of Frank Bowling: London / New York, an upcoming title from Hauser & Wirth Publishers released on the occasion of concurrent exhibitions at Hauser & Wirth in New York and London in summer 2021. Included in the publication and excerpted below is a conversation between Bowling, his wife artist Rachel Scott, and his son Ben Bowling, offering the reader intimate insights into the mater painter’s creative process.

Born in Guyana in 1934, Frank Bowling moved to London in 1953, graduating from the Royal College of Art in 1962. He first visited New York with a small group of peers in the summer of 1961, making additional visits to the city through the early and mid-1960s, ultimately moving there in 1966. Bowling established a studio at 535 Broadway, where he lived and worked until returning to London in 1975. For the next fifteen years, without a studio in New York, Bowling painted out of several spaces in London, producing works which were then exhibited stateside, especially at Tibor de Nagy Gallery, as he sought to re-establish a base; in 1984, he set up the studio in London’s Peacock Yard where he continues to work today. Back stateside in 1990, Bowling became a pioneer in the then-largely-derelict warehouse district of Dumbo on the Brooklyn waterfront, and from that year until 2018, he and his wife, artist Rachel Scott, split their time between the two cities, spending spring and autumn in Brooklyn, summer and winter in London. In the excerpt below, Bowling reflects on his transatlantic travels and the meaning of his art. 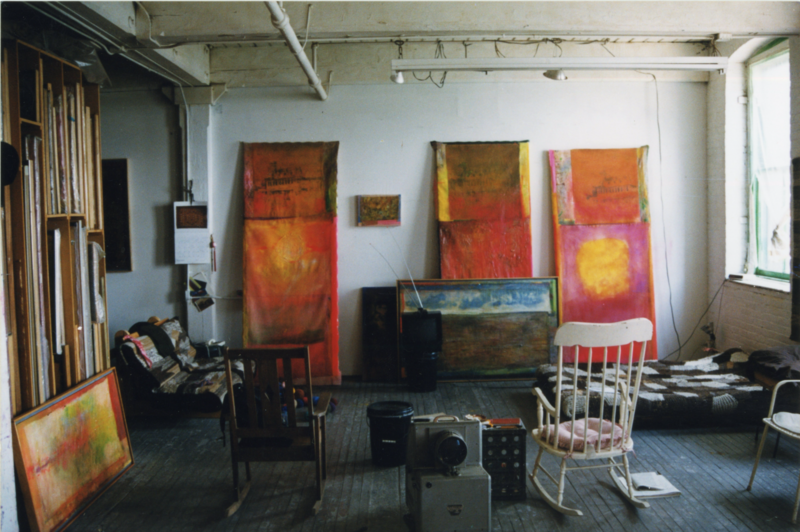 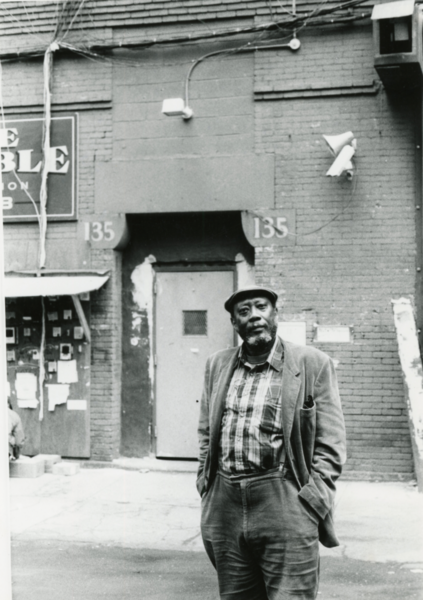 Ben Bowling: So from 1990, when you took possession of the Dumbo loft, all the way up until the last few years, you were going twice a year. Can you say something about the pattern of movement?

Frank Bowling: It was a professional necessity. I did it without thinking. It worked out that we would travel to New York in September, arriving around Labor Day, and come back to London around Thanksgiving. And thank God I had Rachel by my side. She seemed to know where the shops were, how to get around, and always seemed to be at her work with her fingers and needles, knitting and making her patchwork and reading.

Rachel Scott: Nearly all of this knitting was done there, because that’s all I had to do, really, reading and knitting.

RS: I’ve never done so much walking, because, of course, New York is a wonderful place for walking. A lot of the time was taken up just with getting materials, supplies. And luckily we met Spencer Richards in about 1995, 1996—a fellow Guyanese living nearby, a photographer and a writer, who has become our great friend and looks after the loft and all the business of the paintings when we are in London.

FB: A lot of artists tended to be there, even if they didn’t live there. You didn’t stay at night.

RS: But Henry Klimowicz[1] built a desk. He and the other people from Skowhegan were already in the building. They had the whole top floor. And he built a special desk that could turn into a bed at night, so that the landlords wouldn’t know he was sleeping there. It was an extraordinary-looking thing!

BB: It sounds like a very happy time, those years.

FB: I worked all the time—with Rachel.

RS: That’s right. We didn’t see an autumn in London for twenty years, because we were always over there, and that was the time really. We’d always be there from the end of April through to the end of June and then September to November. 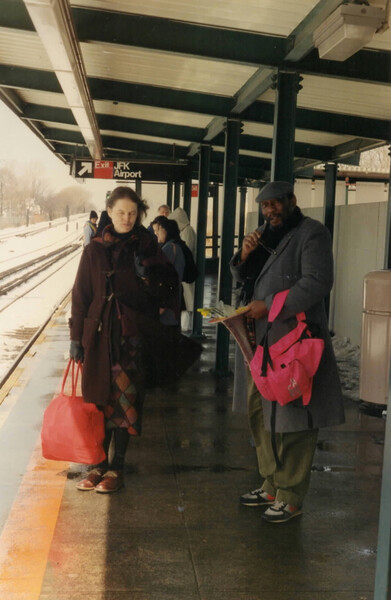 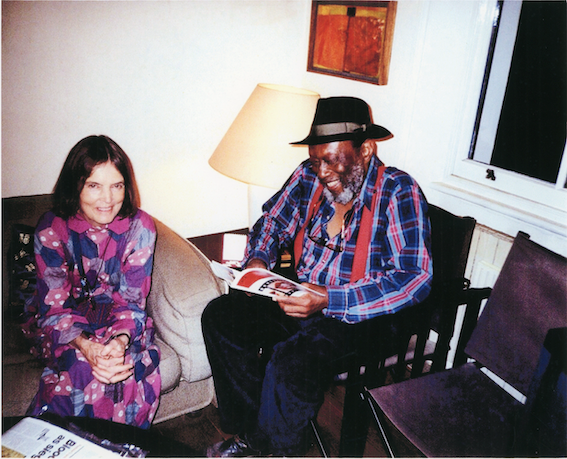 RS: Because even though Frank was elected in 2005, he still wasn’t showing in London. But in New York we had George N’Namdi, without whom we couldn’t have stayed in the city.[2] That was how we stayed there—with the help of the N’Namdis and Spencer, who organized when we weren’t there, kept track of all the work. Then Marilyn Rosenberg, who was running a gallery in Chelsea, brought Frank’s work to Spanierman and put it in the window of the gallery. The Four Seasons Hotel was opposite, and people were buying it, so Ira Spanierman said he would give Frank a show.

BB: What year was that?

RS: The first show must have been September to October, 2010. ‘Odysseus’s Footfalls’ was on the cover of the catalogue, which had an essay by Mel Gooding.[3] Ira said the last show he had—which was in 2014 in an enormous space on the Upper West Side, which he’d split into three galleries—he said it was the best show he’d ever had. It was Frank’s last show with him.

BB: You were taking paintings from here to there, and from there to here?

FB: I would just roll the lot up and move. And I knew that when I got to the other end, I could roll them out again and continue to work.

‘It’s a whole world thing—that’s what my work is all about.’—Frank Bowling 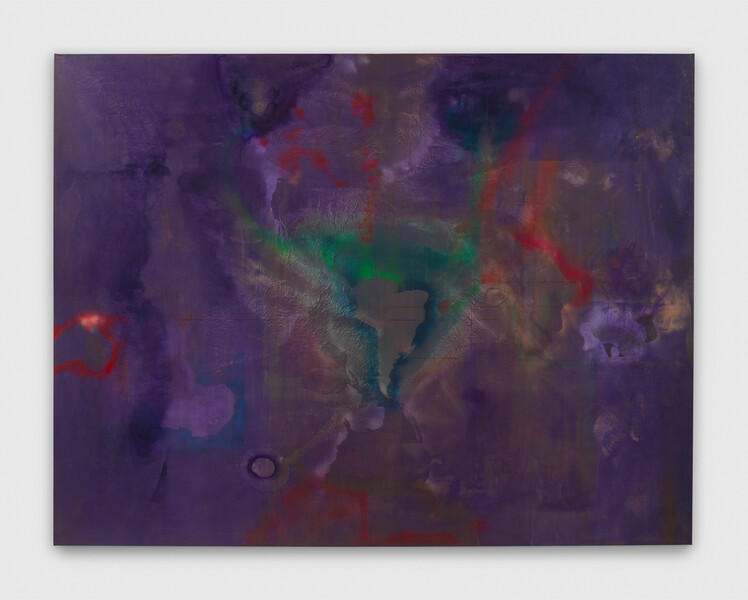 RS: Rose Jones[4] actually filmed us here, piling the rolled-up paintings into our sausage bags. Dave, our neighbor, always used to drive us to Heathrow Airport in his black cab. Rose came with us so she could film us getting into the airport…

FB: As I’ve been trying to point out to you on more than one occasion, it sounds like an exciting life, but it was all done on the hoof—because of my perverse nature and because Rachel is willing, fits in, and seems content despite our disagreements. I don’t know what they are—only that she’s a very, very good eye to have in the studio all the time. She doesn’t want to talk about it much, but she’s got opinions. Isn’t that right, dear?

FB: No, it’s international. It’s all over the world that people are trying to make something out of Modernism. The people who invented Modernism, who invented ‘sophistication’—the French, the Germans, and so on—took their cues from African art, from Primitivism, meaning ‘unsophistication.’ The word ‘Primitivism’ was invented by the white people who took up African ways and drew from African art—Picasso and Braque and them. African art is Modernism before Modernism. Modernism is unsophistication, moved on. What the Africans are doing, or the Chinese, or people anywhere in the world for that matter, gets joined into Modernism simply because everyone is—in a direct line––Modernist. Art, anyone can do it. By whatever means they make their work, they use Modernist procedures, and their heads are trained in the Modernist space. They don’t make much of what they get from abroad, but then they’re in the belly of the whale. It’s a whole world thing—that’s what my work is all about. 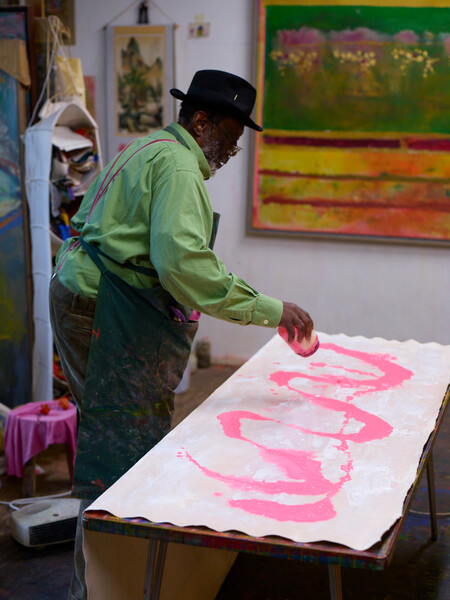 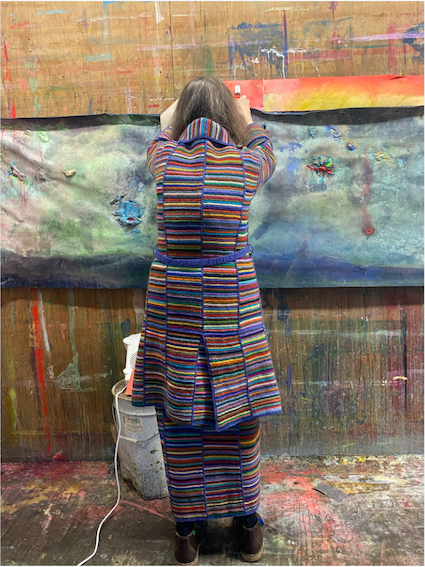 BB: And now you are obviously spending less time in New York for all kinds of reasons. And you’re working in London. Do you still…

FB: I still feel that I am a trailblazer, yes.

What my art is about is a world that’s there, existing, where people don’t bother anymore to make a show about their sophistication. Black art is part of Modernism, by the mere fact that the museum world is concerned. And my work is internationally recognized now, when it should have been long before.

But that’s not something to fret about… I don’t think Braque and Picasso and them, when they started making oodles of money, cared whether there was a time-space dimension to what they were doing. You’d have to talk to Mel [Gooding] about where he got the idea that anyone can do art, and art can be anything. That’s where it’s at. That’s the freedom that America established, for good or ill, about how art and culture work.

[1] Henry Klimowicz is a New York-based artist whom Bowling met as a student at Skowhegan School of Painting and Sculpture in Maine when he was an artist-in-residence there in the summer of 1984.

[2] George N’Namdi is an art dealer who launched the G. R. N’Namdi Gallery in 1982, with locations in Chicago, Detroit, and New York.

[3] Mel Gooding is an art historian, writer, and curator who has written frequently about Bowling.

[4] Rose Jones is Bowling’s former Archive Coordinator in London and the director of the documentary, ‘Scenes from Frank Bowling’s Life,’ which was screened at Bowling’s retrospective at Tate Britain in 2019.