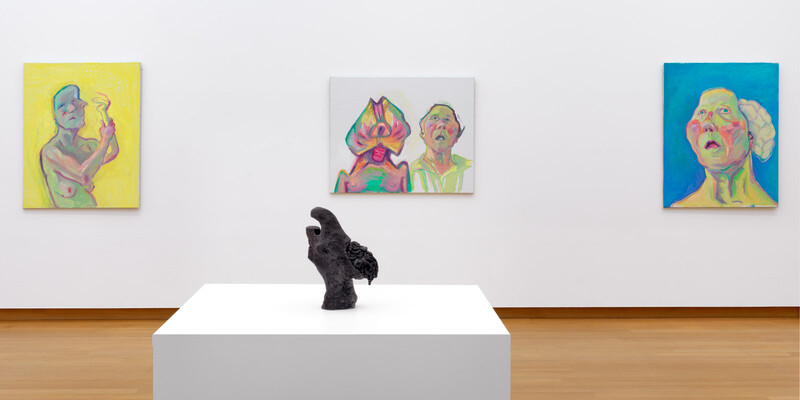 From retrospectives that shed light on the ground-breaking oeuvres of Maria Lassnig, Luchita Hurtado and Jenny Holzer, to the complex reworkings of abstraction found in David Smith and Jack Whitten, this selection of summer exhibitions spans European chateaus, sculpture parks and museums.

2019 marks the centenary of Maria Lassnig’s birth. At the Stedelijk Museum in Amsterdam, ‘Maria Lassnig. Ways of Being’ chronicles Lassnig’s pioneering ‘body-awareness paintings’. This major survey dedicated to the Austrian artist includes over 200 loaned works, and will travel to Albertina Museum in Vienna in September. ‘Maria Lassnig and her pupils’ at Galerie Freihausgasse in Villach, Austria, is a testament to the artist’s important role as a professor at the Academy of Fine Arts in Vienna.

The first ever solo museum show for inimitable Venezuelan artist Luchita Hurtado is on view at Serpentine Gallery in London throughout summer. It charts Hurtado’s 80-year career, and the artist’s investigation into eroticism, the body and ecology. ‘I Live I Die I Will Be Reborn’, provides a sense of her previously domestic and private painting practice, as self-portraits with downward, surreal perspectives accompany fruits, lucid sky palettes and geometric abstractions. 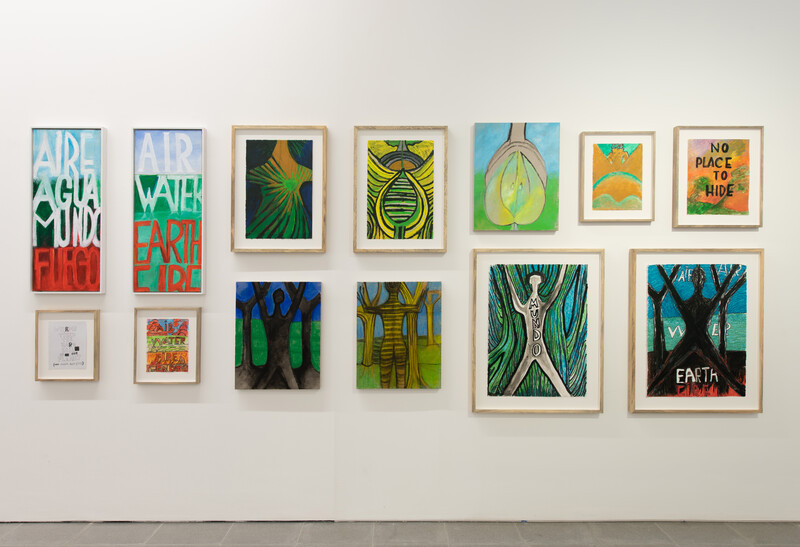 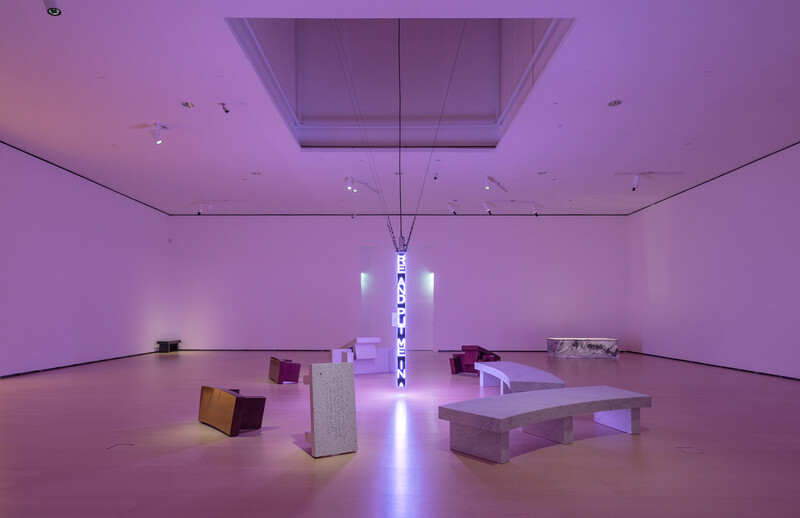 ‘Jenny Holzer: Thing Indescribable’ at Guggenheim Museum Bilbao, Spain presents the largest exhibition to date of work by the artist. Curated by Petra Joos in collaboration with the artist, the show highlights Frank Gehry’s architecture through site-responsive installations. As well as Holzer’s trademark truisms and engraved stone benches, the artist has produced new electronic signs animated by robotic assemblages. Another exhibition of Holzer’s work in Bergamo, Italy, ‘Tutta la verità (The Whole Truth)’, forms a dialogue between the grand architecture of Palazzo della Regione and Holzer’s subversive poetics. Holzer’s new works speak to the current migrant crisis, as she continues to question the inherent power structures in both the institutionalized and everyday language systems across the world.

Château La Coste in Provence, France, holds an exhibition of photographs by Don McCullin, depicting Lebanese and Syrian ruins with a concurrent focus on the coastal areas across the North African countries of Morocco, Tunisia, Libya and Algeria. Following his critically-acclaimed 2019 Tate Britain survey, the exhibition continues to explore the powerful portraits and landscapes of this established war photographer. 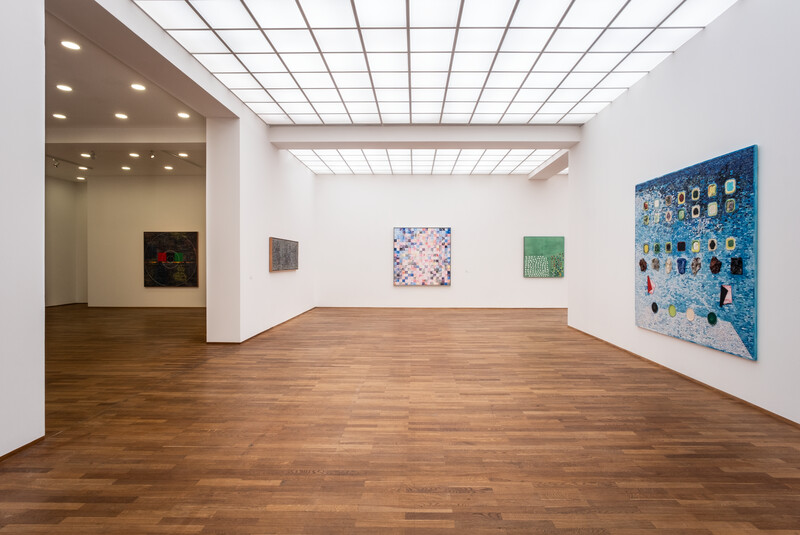 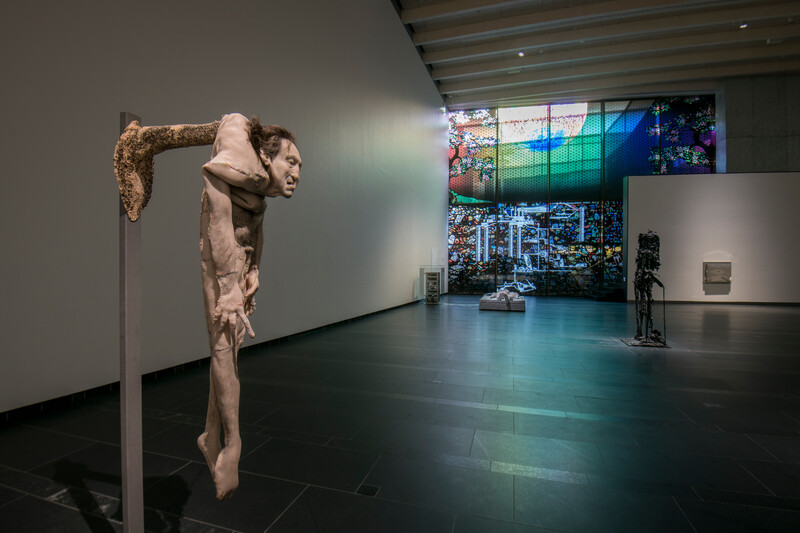 ‘Maa’ is a dystopian, ominous exhibition of work by Matthew Day Jackson at Serlachius Museum in Finland; inside a viewer encounters draped and deflated human skins, sci-fi figures and disembodied heads. The conceptual center is a multitudinous weaving together of archaeology, occult ritual and horror—an imagined state in which anthropomorphic living has met its peak and undergone a process of destruction. ‘Maa’ is also a game exemplified by the presence of a game box, which replaces the traditional museum catalog. 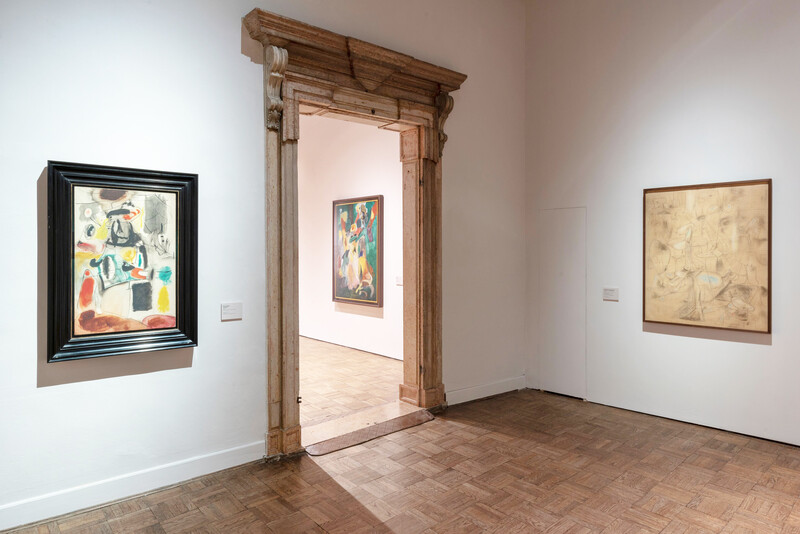 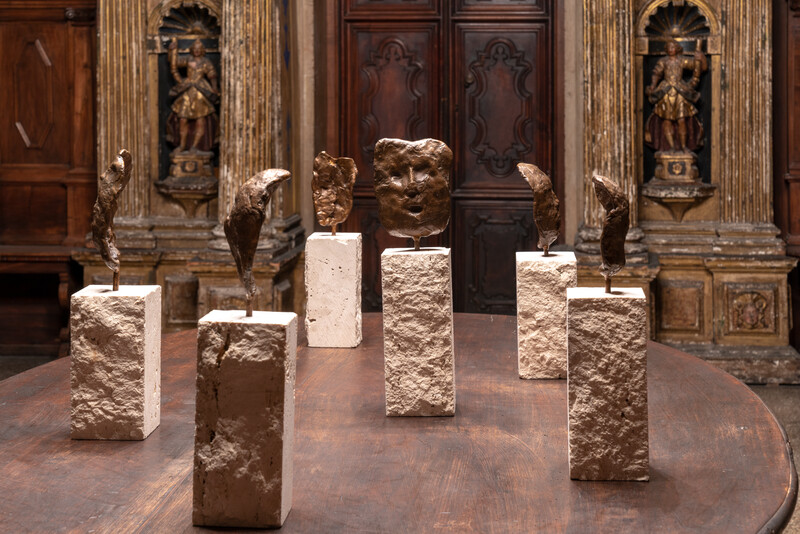 The first Italian museum survey on the career of a leading American painter Arshile Gorky is on view in Venice. ‘Arshile Gorky 1904 – 1948’ brings together 80 of the artist’s works and spans his career trajectory across the early 1920s through to the artist’s refined style as a modern master. The exhibition draws on the artist’s encounters with nature and Cézanne, and his place within the traditions of surrealism, abstraction and figurative painting. His granddaughter writes ‘Gorky seems not to have given much attention in his life for anything other than art, almost as if aware of his own limited time.’ This intense focus is illuminated at Ca’ Pesaro International Gallery of Modern Art.

In Venice, ‘The Nature of Arp’ at the Peggy Guggenheim Collection is the second instalment of an exhibition first shown at Nasher Sculpture Center, Dallas. From reliefs and poetry to delicate papier mache and biomorphic sculpture, Arp’s artistic oeuvre is rigorous and astute, and his place in the evolution of twentieth-century sculpture cannot be understated. Curator, Catherine Craft, emphasizes the contemporaneity of Arp’s work, explaining that ‘there was always a recognizable sensibility. No matter the medium, his art seemed fresh and very much of the present.’ At Arp Museum Bahnhof Rolandseck in Germany, ‘Nature is a Petrified Magic City’ documents the artist’s sculptural practice, and allows visitors a sense of Arp’s studio, with the presentation of plaster models, tools and casting moulds.

The Dallas Museum of Art’s presentation of Günther Förg’s work at Palazzo Contarini Polignac in Venice provides a new context for the pioneering artist’s work focusing on paintings, photographs of architecture and lesser-known sculptures. ‘Förg in Venice’ contrasts the artist’s modernist use of monochromy against the ornamental interiors and Renaissance architecture of its Venetian setting. The juxtapositions pose a challenge to the viewer about the relationship between art and architecture. Förg remarked in 1989 how ‘Since the photographs are not only framed but also glazed, the viewer becomes part of the whole…’ 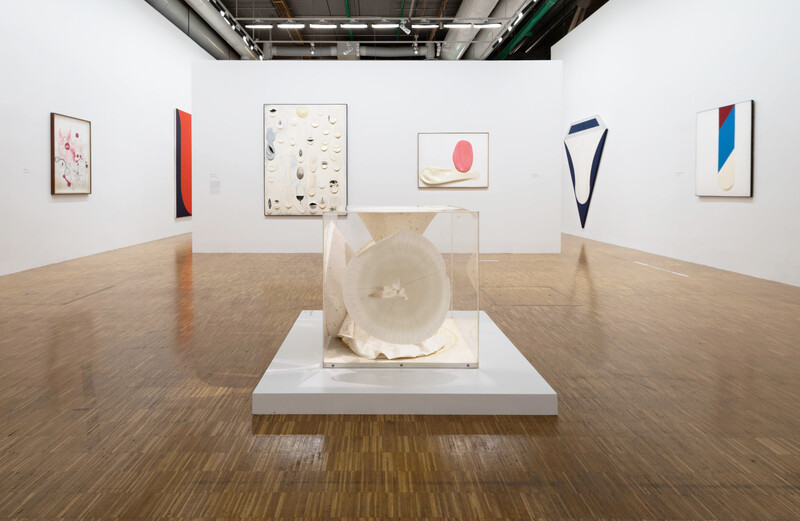 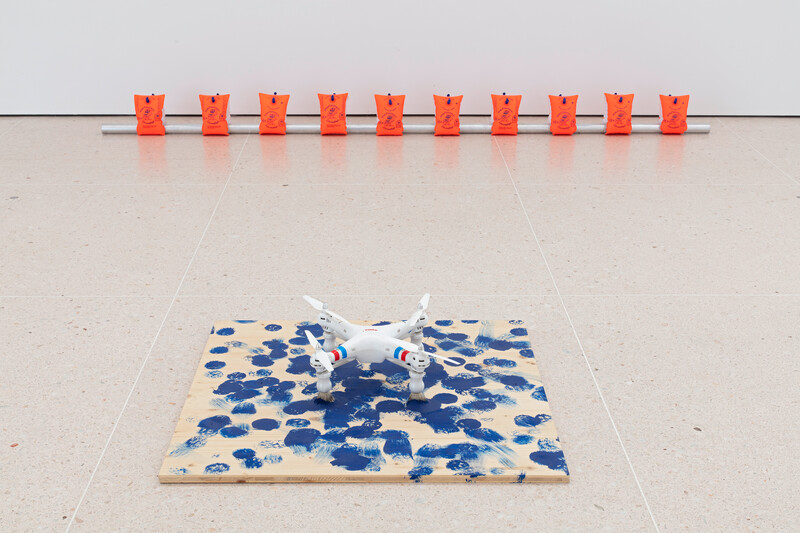 Embodying a sentient approach to philosophy and spirituality, the Japanese artist Takesada Matsutani has explored the malleability and enduring power of materials for six decades. The unique trajectory of his artistic path is on view in ‘Takesada Matsutani’ at Centre Pompidou in Paris, forming the first major retrospective of Matsutani’s work in his city of residence. His distinctive works created through experiments with vinyl adhesive glue are displayed alongside larger sculptural works, documents of the artist’s performances and four new pieces made especially for the exhibition.

‘Roman Signer. New Sculptures, Videos and Installations’ at Kunsthaus Zug in Switzerland, presents Signer’s poetic assemblages. As objects become words, a narrative is formed between ‘a lawnmower and a chair, a boot, an umbrella and a kayak.’ In a more unusual gallery setting—inside the fifteenth-century French castle at Château de Montsoreau – Musée d’art contemporain—the exhibition ‘Roman Signer’ showcases the Swiss artist’s sculptures and photography, as the artist rethinks the principles of each form. 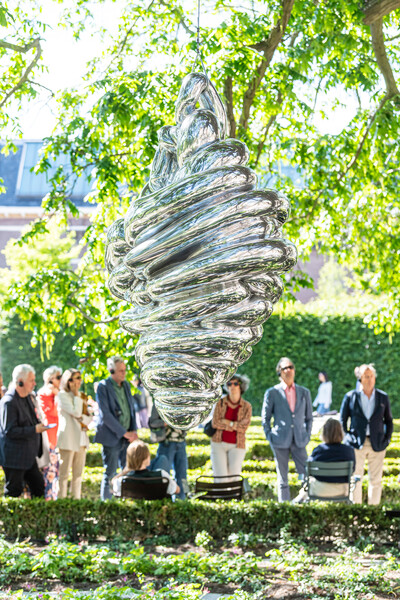 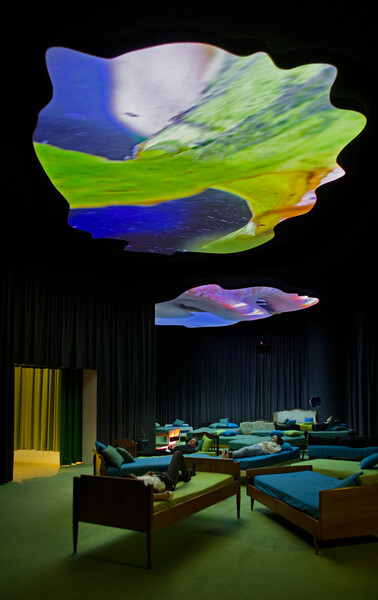 ‘Åbn min lysning (Open my Glade)’ is a large retrospective of Swiss artist Pipilotti Rist’s work at the Louisiana Museum of Modern Art in Denmark. It features immersive installations such as ‘Pixel Forest’ (2012) and ‘Sip My Ocean’ (2018), where viewers lie on beds or wander through fields of LED lights. Rist’s work possesses a playful yet powerful investigation into the essence of light, color and the experience of viewing art. Traces of an ‘upside-down Monet’, the strange, distant shouts of a musician or sensuous visuals of the body all collide in Rist’s world.

In Amsterdam, the Rijkksmuseum Gardens are populated with twelve Louise Bourgeois sculptures throughout the summer. Drawing on maternity and the artist’s childhood, the works can be seen as homages to her family members; whether her father’s idiosyncratic habit of hanging chairs on roof beams or the weaving practice of her mother. The open air exhibition is the seventh in a series of annual shows at the Rijkksmuseum, following Alexander Calder in 2014, and Eduardo Chillida last year. 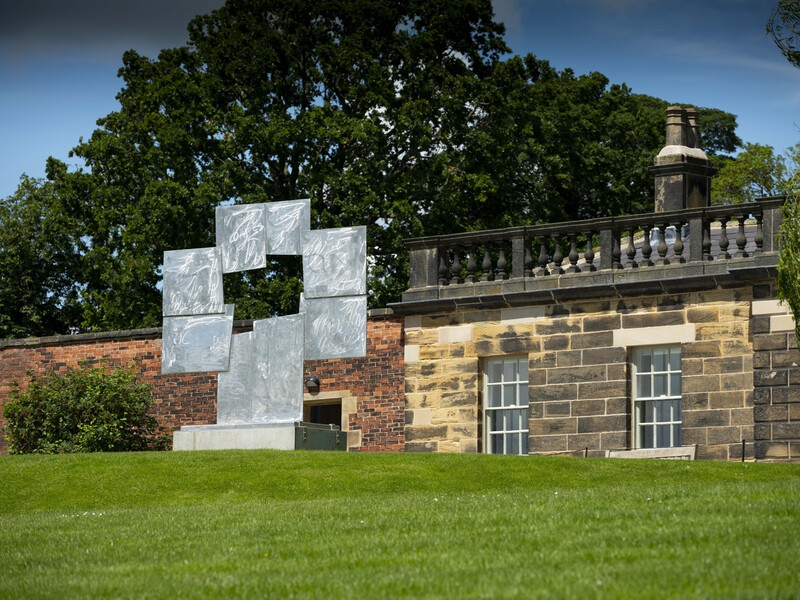 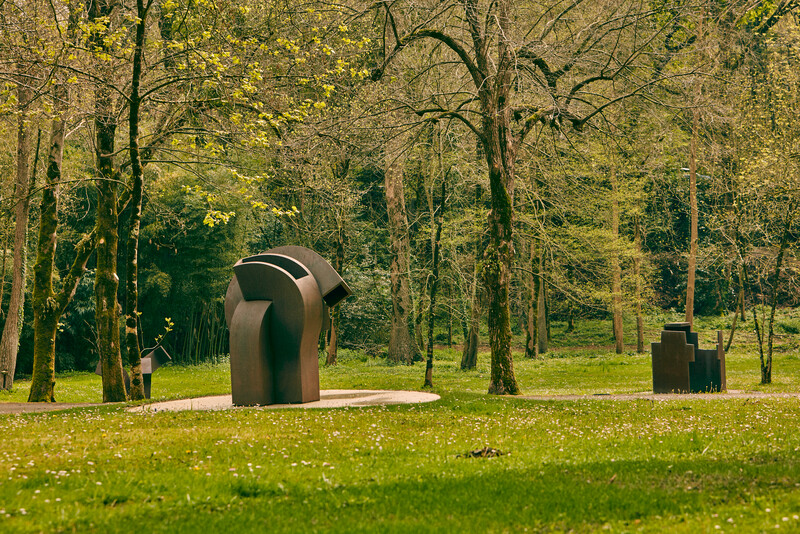 This year saw the reopening of Chillida Leku, Eduardo Chillida’s sculpture park and museum in the Basque Country, Spain. The artist spent a large duration of his life on a quest to create ‘a space for his sculptures to rest’. The exhibition ‘Echoes’ is named after a work by the artist and relates to his relationship with music, and belief in the sonic and poetic potential of sculpture.

In the UK, works by American sculptor David Smith permeate with a similar lyricism, as they populate the exteriors and Underground Gallery of the Yorkshire Sculpture Park. ‘David Smith: Sculpture 1932-1965’ forms a chronological retrospective of thirty works from the 1930s onwards, as well as previously unseen artefacts from Smith’s Bolton Landing home. Materials range from wood, mussel and clamshells, to his pioneering use of welded metal and industrial materials.