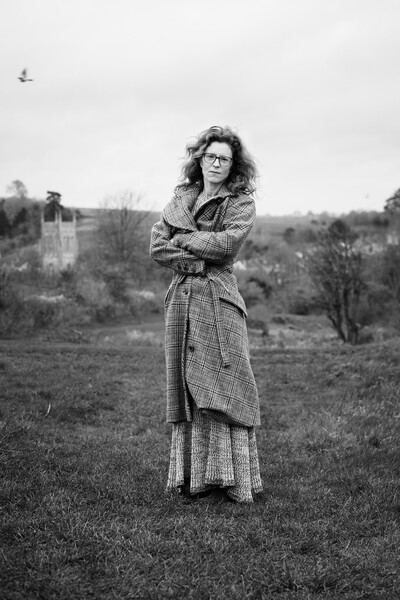 The Origin of a Collection

Manuela Wirth, gallery co-President, shares her memories and earliest experiences of the artists in her personal collection, and reflects on how they became part of the gallery’s story.

The first piece of art I bought was an edition by Meret Oppenheim—the Drunken Squirrel—which is now installed in the Roth Bar & Grill restaurant in Somerset. My collecting habit was very much influenced by my mother, Ursula Hauser, whose collection of female artists is one of the best in the world.

My mother always liked Surrealism, and one work she really loved was Meret Oppenheim’s fur cup. When she saw this work, it became her most wanted object, but it was already placed in a museum. So she did some research and found that the fur gloves were about to come to market, and she was able to acquire the work. When we started our adventure at the gallery, my mother, Iwan and I traveled a lot. We went to see shows; we went to biennials, to museums, and to studios. We discussed and saw a lot together. Then my mother started to create her own collection, but it was always a conversation.

‘It’s one of the highlights of collecting—if you can go to the studio, meet and see the artist working there and for them to show you around their studio’

She went in a different direction, so some of her artists are represented in the gallery but others she has solely in her collection. There was, of course, an influence—what my mother collected, we then became interested in or vice versa. For example, the first internationally known female artist my mother collected was Louise Bourgeois. She had seen many works before, but what really caught her attention was Bourgeois’s work for the American Pavilion at the Venice Biennale in 1992. There she saw a pair of legs, which she was really drawn to because of the material. It was a rubber work, it was moving and it was a completely different kind of sculpture to the ones that she knew. Ursula researched the work and found out that it was an edition, and she absolutely wanted to have one of these editions.

What attracted her was the whole—but at first, it was these very long legs. Every woman dreams of long legs. Then the material, and the way it was a moving sculpture, not on the floor or on the wall—it’s always moving. She went to New York where she met Pat Hearn, the most extraordinary gallerist, who had quite a lot of female artists in her program, and she found an edition of the Louise Bourgeois legs. Pat helped to organize a visit for Ursula to see Louise Bourgeois in her studio. From then on, Ursula started to collect her work and we became interested too. One thing led to another and we started to work with Louise Bourgeois at the gallery. 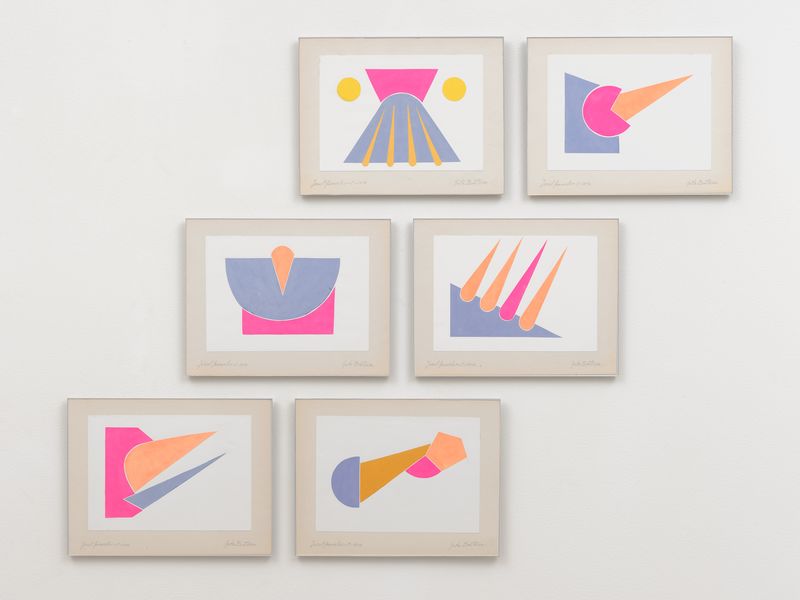 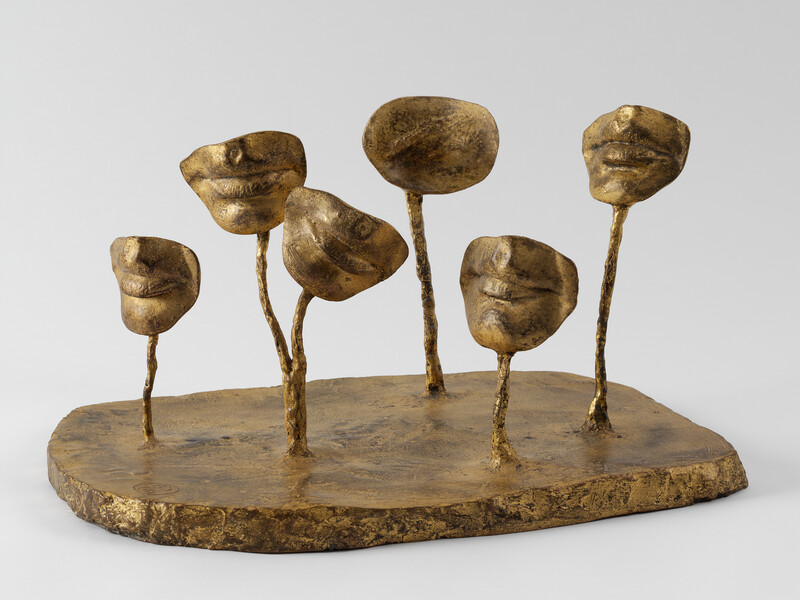 I love the use of fabric and stitching in Louise’s work, which connects it back to her personal life—using her own clothes, doing the stitching by hand so you feel the artist in the work. I am attracted to the crossover between textiles and art in general—I like art where maybe they use different materials, where it becomes more like craft. For example, I started to collect Geta Brătescu’s work long before we represented her.

Two of the pieces I first collected were a fabric piece and a work where Geta collected cigarette papers from which she made a piece that was a large circle.

And this fascination with materials can be seen in other artists we are passionate about, particularly the way female artists have co-opted certain materials and drawn attention to them. There’s Phyllida Barlow, who uses not-so-common materials such as papier-mâché and pompoms. Also, what’s always attracted me is the awareness in these female artists of their own bodies—artists such as Maria Lassnig. My mother started to collect Alina Szapocznikow early on and one of her first pieces was a little sculpture with lips. My mother always says that when she meets someone, she first sees the lips and the eyes. 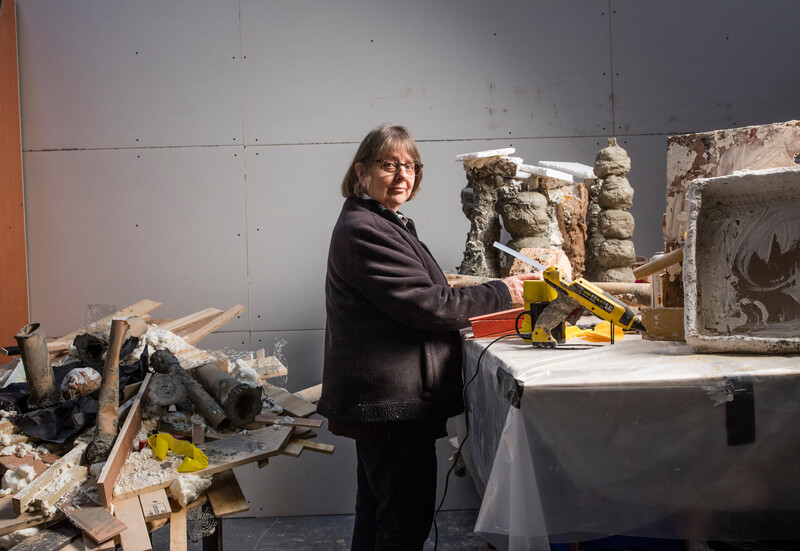 We often first discover a new artist in a formal exhibition setting. When we see an artist we like, we try to go to the studio to meet the artist, and then you immediately see if you will start to collect their work. We saw Berlinde De Bruyckere for the first time in the Italian Pavilion in Venice and I was captured by the horse, so I tried to find out who represented her. We then contacted the gallery and started to work with Berlinde.

We first saw Mary Heilmann’s work in Pat Hearn gallery and we loved it from the first moment we saw it. Ursula started to collect her and we started to represent her first in Europe, as Pat Hearn was showing her in America. Where possible, we try to establish a personal connection with the artist. But, for example, I never met Geta Brătescu. I would have loved to have met her and really regret I didn’t manage to visit her in Bucharest. It’s one of the highlights of collecting—if you can go to the studio, meet and see the artist working there, and for them to show you around their studio.

And we continue to add to the program female artists who have come to represent our core DNA. Luchita Hurtado is a good example. Graham Steele, a senior director in LA told me to look at her work when we were at an art fair. I went and immediately loved her work, and it was before Hans Ulrich Obrist then told us that he was doing the forthcoming Serpentine exhibition. Her work is so fresh, you would not think it’s been created by a 99-year-old woman.

‘It was actually never the intention for my mother or for Hauser& Wirth to have all these female artists. From the beginning, we just felt the quality and the importance of these artists and their work’ 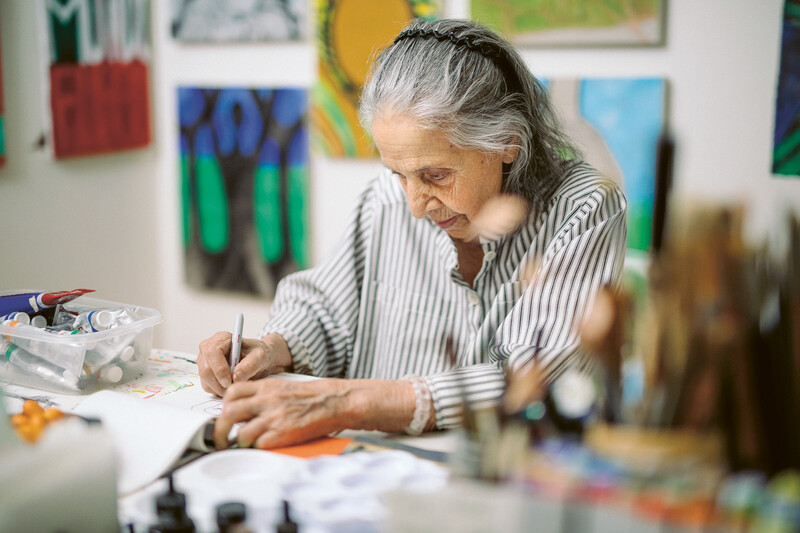 The same with Ida Applebroog—it’s very similar. She had her children, she worked during the night locked in the bathroom and created her vagina drawings. This is identical to Luchita when she created her body paintings. Although Hauser & Wirth has become known for representing female artists, and within that a particular group—those of an older generation who were previously overlooked—it was actually never the intention of my mother or of Hauser & Wirth to have all these female artists. From the beginning, we just felt the quality and the importance of these artists and their work.

Maybe because when we first started the gallery, they allowed us to represent them when other galleries were less interested at the time because they were undervalued; whereas we were interested not in the commercial gain, but in their talent and practice. We never consciously chose to build more female artists into the collection. When you think how we started with Louise Bourgeois, Lee Lozano, Eva Hesse, and Pipilotti Rist, they were all organic decisions, but we also had Paul McCarthy and Richard Jackson. I think from the beginning, there were always as many, if not more, female artists than male artists.

We are now opening an exhibition of my mother’s collection in Somerset. We feel it’s so important to make the work accessible to new audiences, and often loan works to museums for this reason. But to have the exhibition at one of our own galleries has been a very special experience, particularly for me to curate it.

It’s a very intimate view of how my mother is collecting. It shows that it’s a high quality art and also very touching and emotional. I believe it’s a completely different view than that of a male collector. It shows people a woman’s view and how the collection has grown. It’s very eclectic, not with a clear guidance. It just grew from one work to the next and it shows that you can collect in groups, not only single pieces. It is a very, very personal collection and something I am proud to share with the world.