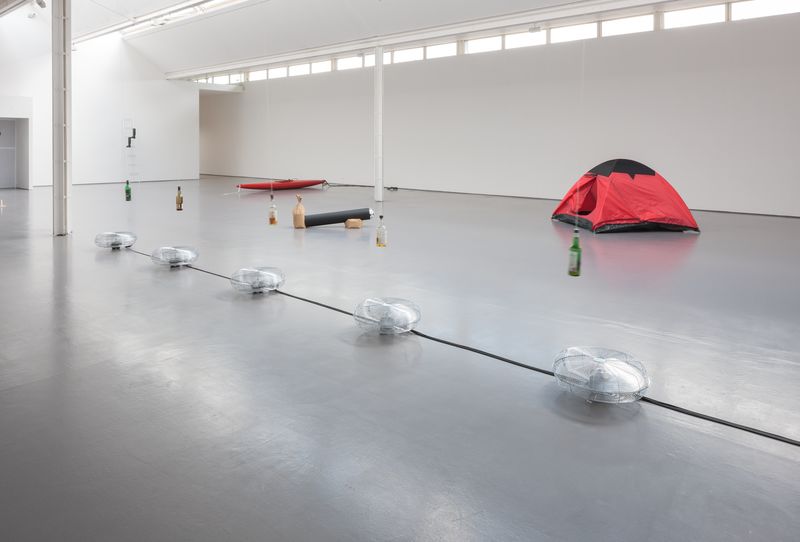 From kayaks filled with scotch to empty boots on a ladder, Signer has a lightness of touch and mischief that almost tips into menace. His art is lighthearted, but it is also thought-provoking and atmospheric while appearing almost throwaway

To be is to be observed, Bishop Berkeley claimed. Whether a tree falling unseen in the forest makes a sound or not is incidental. It leaves traces, wreckage, reverberations.

Birds scatter into the canopy and beyond. Butterflies turn eventually into tornadoes. The artwork of Roman Signer (b1938, Switzerland) is made up ostensibly of the remnants of past events. He is an artist of echoes, a witness to the unheard falling tree.

At times, this appears literal. In Signer’s Installation with wooden beams (2015), the gallery space is transformed in a simple but resonant way. The artist has placed a grid of upright timber beams through the room and then knocked one over to create a partial domino effect. The result, which the viewer walks around, and occasionally steps over, is like an accidental path through a forest. It is the repercussion of an action and the incorporation of the laws of both chance and cause and effect into art (or rather it highlights the fact that they are always there). To a cynic, it is just a load of wooden posts in an empty room, but it’s hard not to feel something strangely evocative here. It underlines the suggestive power of art; a painting, after all, is just pigment smeared on canvas. The stillness of the gallery space combined with ambient sounds from outside take the mind to other places; a hint of impossible unseen forests in a corner of the city.