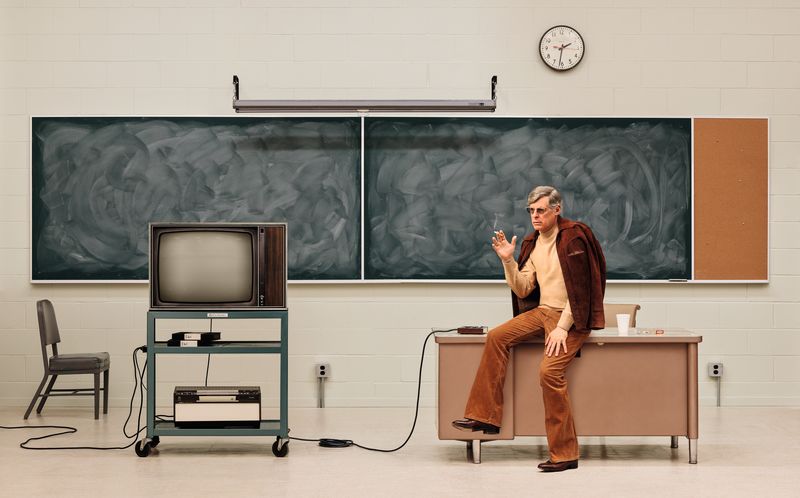 'It’s a show split between photographic works in light boxes and paintings.'

Francesco Tenaglia: Can you introduce our readers to the exhibition at Hauser & Wirth?

Rodney Graham: It’s a show split between photographic works in light boxes and paintings. The seven light boxes were done over the last year; I made them all in 2016. They’re a continuation of something I’ve been doing for quite a while, in which I play characters, representing myself as a performer. One large triptych is called ‘Antiquarian Sleeping in His Shop.’ It shows an antiques dealer or thrift store owner, somebody who is a curator of medium-priced to cheap objects of aesthetic value. A collector-curator. In his shop sleeping. A lot of works I do are based on people I know or see, and in this case it’s a pastiche of several such characters who have these small antique stores in Vancouver. People my age, older hippie types.

Sometimes I think of the characters as representing directions I could have taken in my own life. People who interest me, in any case. The paintings are part of a painting practice that I do continuously. These are done quite recently, collage-paintings on pages from Circus, the rock magazine of the 1980s. Somebody from my studio found a batch of them that a neighbor was throwing out, and I was struck by their absurd quality. At that time the magazine was devoted almost entirely to so-called hair metal, very male rock fantasy stuff. I was interested and started working on them with spray paint and gesso. I was thinking about Robert Rauschenberg, actually, and his transfer drawings. I’m always trying to find ways of painting.

Francesco Tenaglia: Regarding your photographs, there are so many of the characters by now. It’s a huge collection. You say they are sort of Frankensteins of characters you know in your real life. Have you developed any form of reflexivity toward them? Affection? In your mind, do they have their own personalities and lives after you’ve ‘performed’ and photographed them and put them up in a gallery? 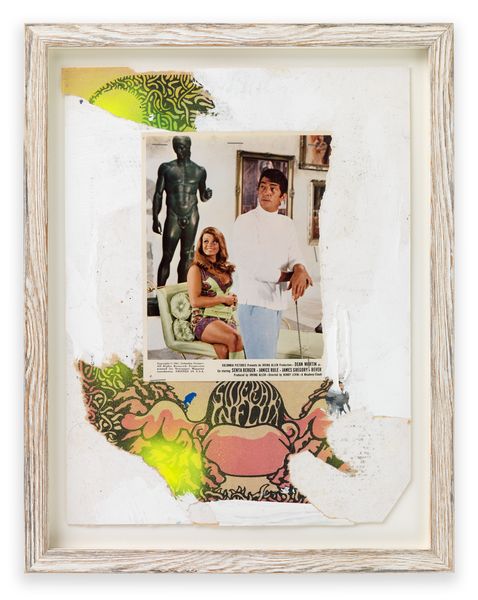 RG: With some. It started with a piece called ‘The Gifted Amateur’ (1962), where I played a middle-class professional guy who’s just come back from seeing a Morris Louis exhibition in New York and thinks it’s something he might like to try, since it looked easy and fun. I didn’t think it would lead to a painting practice. But it accidentally did, because the pour painting I made as a prop for the photograph seemed interesting to me, so I continued doing them on their own. It provided an opportunity. Another character, the so-called pipe-cleaner artist, is also a pastiche. I was inspired quite specifically by a Man Ray photograph of Jean Cocteau working with pipe cleaners, making a little sculpture for the rotating head you see in The Blood of a Poet (1930). I was interested in the idea of somebody who might have made a career out of that, working in Italy in the 1960s. Also I was inspired by a photograph of Asger Jorn, in Albissola in the 1960s. I replicated this kind of utopian studio idea. A sun-bathed farmhouse that’s a rustic studio where somebody is making small objects.

FT: How do all these bodies of work fit together in your mind?

RG: The pipe cleaner works are interesting as tactile works that I can do myself. For the drip paintings I use assistants, and the photographic works involve something almost like a film crew—I don’t really do the technical side of the photography myself. And that’s how I got into painting. You’re sitting in your studio, waiting for the photographic work to be done in the lab, and you find yourself sketching out ideas. That’s what started me on the painting track. And now, since I discovered painting late in life, I feel compelled to make up for lost time. So you could say that the photographs became a way of exploring painting and sculpture.

FT: Tell me about this collage series you’re presenting. Circus, a hair metal magazine, is charged with notions of taste. You cancelled out most of the people in the pictures, and the works have ended up very formalist in a way. Can you offer some details about your approach?

RG: The magazines are completely outrageous cock-rock fantasy projections. Page after page. It must be an absolute nadir of rock fashion, the early to mid-1980s in that particular genre of music. It’s oddly hysterical. You don’t need to see that much of it to get the idea, it’s so iconic. So I gessoed over them and made them part of the circus. Also, just the rectangle of the page was formally fun to work with. I pulled the pages out, and sometimes did a reverse transfer like Rauschenberg did so successfully—in my case maybe not so successfully! And then making a bit of a grid with the pages. It’s something I only started doing three or four months ago. I worked frantically, since I wanted to see what I could come up with. They’re an experiment—a way of moving forward with the painting practice that I’ve longed for for a while. I do still enjoy the photographic work, though, and my photographic practice is being somewhat revitalized by the possibilities of digital. I was working in analog before, in large format. Now I’m working with a digital photographer and finding that it opens up possibilities, not least of which is being able to take many, many more pictures. More takes. So I can work on my pose. And of course the possibilities of Photoshop. I’m enjoying it again.

FT: What are you working on now?

RG: I’m taking a bit of a break. This last body of work was intense to make. But I’m continuing the painting practice. And music, always. I have a new record coming out in the spring.

FT: On what label?

RG: Vinyl Factory. And we’ll have a download version. It’s a pop-rock record, what I do. I want to do more music next year, and I want to make a film. It’s something I haven’t done for a while. I’ve got at least one big idea for a film project.

Though best known as an artist for his films, photographs and installations, music has been a major part of Rodney...

Rodney Graham: That's Not Me

This documentary visits Rodney Graham in the final planning stages for his exhibition at BALTIC Centre for...

Including tracks ‘I Wish I Never Saw The Sunshine’ and ‘I’m the Loneliest Fool’, Rodney Graham’s honesty and...