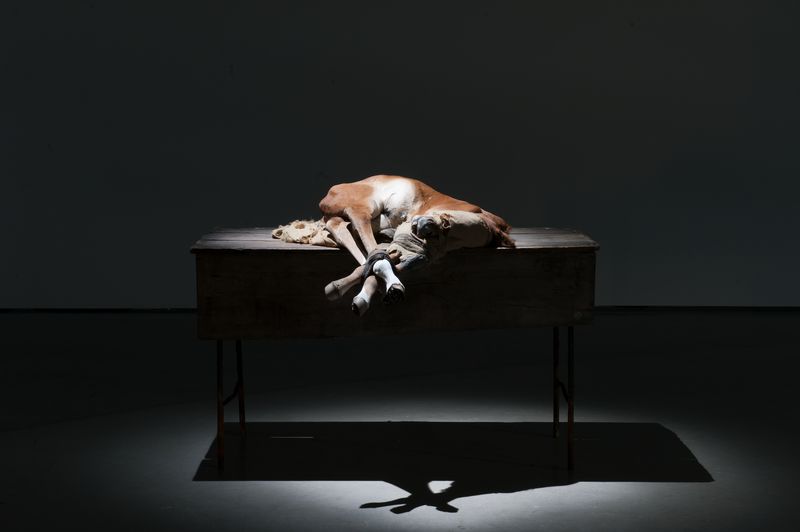 The dim, dramatic lighting and presentation of morbid subject matter in Berlinde De Bruyckere’s recent exhibition at Hauser & Wirth, ‘No Life Lost,’ actually transforms the space into somewhere between a tomb and immersive theater event.

Taxidermy horses and skins occupy the first gallery, and an enormous transfigured tree sculpture from De Bruyckere’s exhibition at the 2013 Venice Biennale is installed in the cavernous back room. Conveying destruction with slippery historical references ranging from the biblical to World Wars I and II, the works in the show grapple with pain, beauty, and mortality.

Despite Maurizio Cattelan and Damien Hirst’s strong and prankish claims to the domain of equine taxidermies, the histrionics of De Bruyckere’s two-horse installation entitled ‘No Life Lost II’ (2015) immediately command attention. Two thoroughbreds are stacked on their sides within a vintage natural-history display cabinet that is barely large enough to contain them. Their legs, necks, and hunched backs seemingly push open the glass doors. They are arrested in motion, as if piled on top of each other by an explosion. Their otherwise handsome and robust bodies seem to kick and writhe, while also revealing broken bones and neglect. This sense of movement and realism gives them a disconcerting cinematic quality, materializing a sense of history in arrested motion.

The same aesthetic migrates to a blindfolded foal with legs bound on a wooden table to the right. Entitled ‘to Zurbarán’ (2015), the lighting and composition mirrors the beauty of the Spanish master’s ‘Lamb of God’ (1635 – 1640) while surpassing it in grit. Here the infant horse functions as a sacrificial lamb in an existential world. It is not clear for whom the foal has suffered, although it clearly embodies some sort of collective destruction. This is reinforced by the proximity of seventeen enormous skins hanging in three solemn rows from meat hooks anchored to the high ceiling. The hides are raw, gristled, and mostly inside out with bits of fat and connective tissue clinging in wax-coated folds. Like columns of a defeated army, the power of those hides rests in the suggestion of what a full-fleshed equestrian brigade of that number would command in life. Although they also evoke the image of a slaughterhouse, the systemic destruction involved gives memory to the lives lost in gas chambers during the Holocaust. 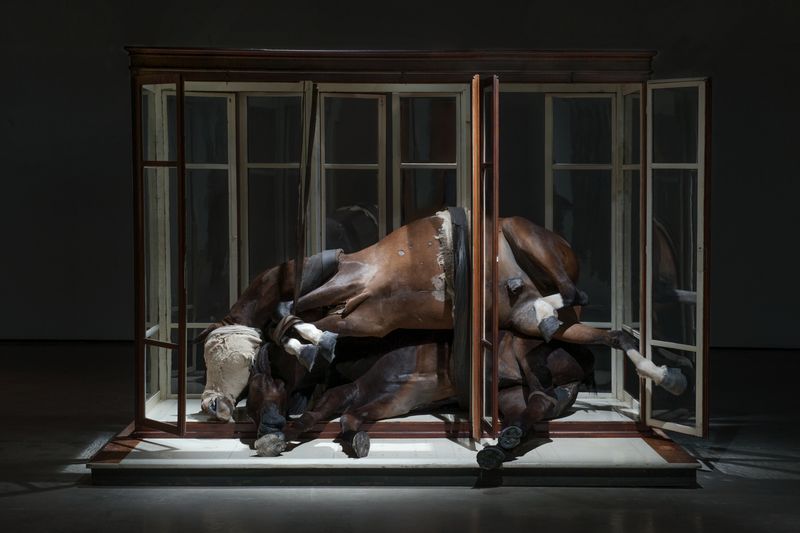 Around the corner, ‘Kreupelhout – Cripplewood, 2012 – 2013’ (2013) instantly turns the theatricality of the exhibition into catharsis. Cut sections of giant knotted elm loom sideways like the hulk of a recumbent body. Smooth, barren tree limbs shoot out in a tangled heap. Alien in their combined animal, human, and arboreal qualities, they are bound together by soiled pillows that serve as improvised bandages. Here we experience the uncanny, because the wounded and bodily quality of the installation is clearly connected to the equine motifs in the previous gallery. It is remarkable—and entirely intentional on the part of the artist—that a tree resonates with so much human suffering. In her published writings within the Biennale exhibition catalogue, De Bruyckere expressed her intention of creating a work inspired by the patron saint of Venice, Saint Sebastian. Like this saint, who was martyred by arrows, the reddened and waxen bark elicits compassion.

Finally, upon returning to the main gallery, the work that at first seems incongruous is the series of almost identical watercolor paintings in ‘Met Tere Huid 2015 – 2016’ (translation: With Delicate Skin) (2016). What first reads as vulvas also formally corresponds with the flayed skin symmetrically draped across a rusty, early 20th-century industrial tower in the adjacent ‘Penthesilea II 2014 – 2015’ (2015). With so much masculine imagery related to horses, war, martyred male saints, and industry, the injection of O’Keefe-like essentialism adds a layer of complication. Because this is the only moment in which the work is unsurprising, it attracts attention last and therefore only politely asks the viewer whether they ought to reconsider femininity as a leading motif within the exhibition.

While this show thwarts easy interpretation in favor of complex layers of embodied content, it is among De Bruyckere’s finest work. Rendering the original forms of horses, skins, and trees while maintaining a sense of fidelity to their original nature lends them a somnolent realism that oddly condenses suffering from early-20th-century wars into the bodies of non-human protagonists. Giving physical form to something as temporal as history and loss, De Bruyckere’s sculptures possess a profound gravitas. They are like lightening rods of conscience to remind us of the collateral cost of violent large-scale political conflict. In this way De Bruyckere’s exhibition should haunt us with urgency, because tremendous suffering of this kind continues around the world.

Berlinde De Bruyckere: Surfaces are Containers of the Souls

“For me, they have human qualities, human sensibilities.” Meet the acclaimed Belgian artist Berlinde De Bruyckere,...

Inside her Ghent studio, Berlinde De Bruyckere discusses death, drapery and intimacy in her work ahead of her solo...

Read and listen to Belgian artist Berlinde De Bruyckere’s moving and meditative thoughts on a painting for...