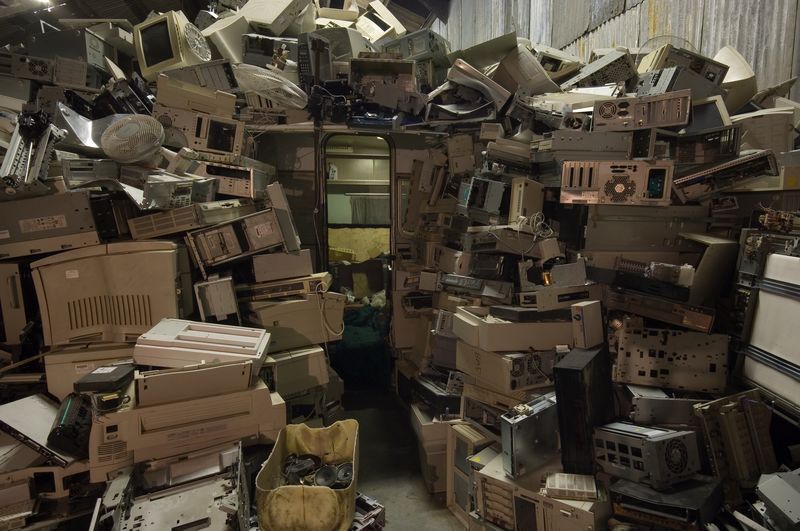 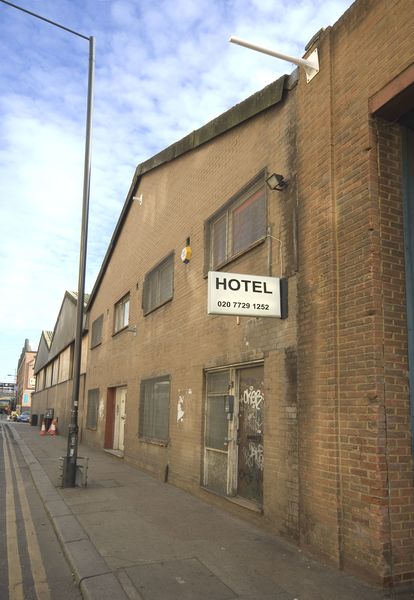 Stripped of the usual discreet gallery signage, the entrance to the space was stage-dressed as a low-rent flop-house. After a brief reality-check –  being asked by a smart young gallery assistant to sign an accident disclaimer – the seedy mise-en-scene continued inside. Worn, carpeted stairs led up into a passageway off which were a set of offices and bedrooms. Thunderous Heavy Metal music blared from a stereo. Along the corridor were lined makeshift bunks; less ad hoc accommodation for oversubscribed youth hostel dorms than cramped crash-pads for illegal itinerant workers. One door opened into a room stuffed with fossils and exotic animal bones – an anthropologist or archaeologist’s study, perhaps. A hole knocked in the lower part of the wall led into an antechamber, at the centre of which stood a burnt-out motor scooter.

Walking further along the bed-lined corridor, the mystery thickened; a balcony at the end of the passage overlooked an enormous warehouse containing a number of metal Portacabins, around which were clustered high stacks of disused refrigerators, broken televisions, VCRs, radios and tools. Descending the stairs onto the shop floor of this electrical knacker’s yard, you were able to explore the narrow pathways that snaked between vertiginous columns of fridges, nests of wiring and circuit board landslides. The Portacabin interiors further suggested human presence – half-empty beer bottles, pages from grotty porn mags stuck to the walls, more sleeping bags and camp-beds, an area with a punch bag and homemade set of weights. 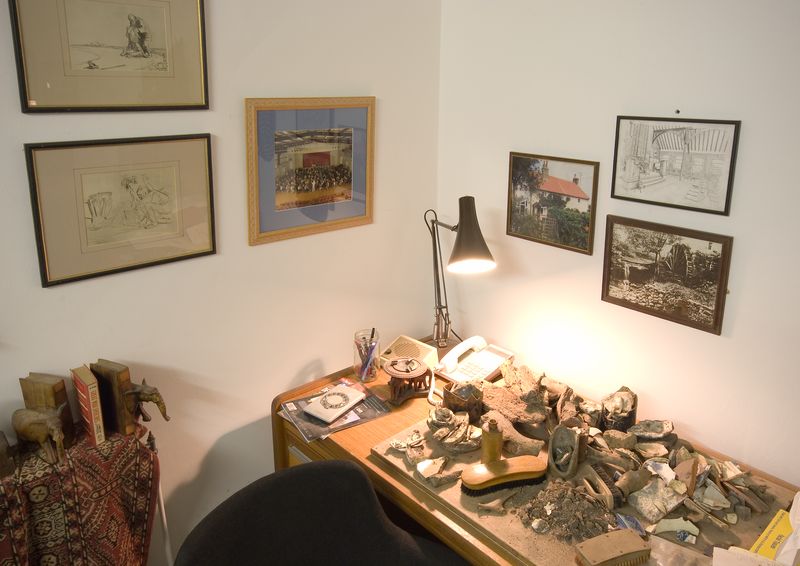 Two more distinct zones stitched narrative teases into the installation. Poking from a hole in the floor of one of the Portacabins was a ladder, which plunged through levels of dirt to a clandestine archaeological dig; a large mound of soil encasing, judging by the huge pair of tusks jutting from one end, a prehistoric mammoth. Elsewhere, another door led onto a street-level shop front selling fridges and TVs that, presumably, had been reconditioned in the workshops out back. Amid the bland, strip-lit rows of appliances were yet two more narrative elements – a pile of prayer mats woven with motifs celebrating the events of 9/11, and a set of shelves carrying copies of Adolf Hitler’s ‘Mein Kampf’ (My Struggle, 1925) translated into Arabic.

‘Simply Botiful’ shared unmistakable similarities with the work of Mike Nelson – both Büchel and Nelson make large-scale immersive installations that function, to put it simplistically, as film sets. (Some may prefer the term ‘fictional spaces,’ but since these are real, physical rooms, they’re certainly not fictional.) Utilizing meticulous detailings and faint hints of narrative – the smell of stale beer for instance, or a faded map of a far-away city pinned to a wall above a dilapidated sofa; the uneasy sense that the residents of these spaces might reappear at any instant – they weave together references ranging from current affairs to underground literature. Yet whereas Nelson’s distinctly literary works self-consciously dip into the realm of the popular imagination, Büchel seems more concerned that his are seen to deal with events in the ‘real world.’ Reading ‘Simply Botiful’s’ heavily-played out themes of migrant workforces, black market economies and Islamic militancy, it was hard not to imagine that Büchel must, at some level, have intended to make some kind of connection with the surrounding Brick Lane area, also known as ‘Bangla Town’, after the long-established Bangladeshi communities living there. Even the hinted secret histories and cloak-and-dagger archaeology – here like something straight out of an Indiana Jones film – mainlined a fascination with the area’s macabre Victorian history and psychogeographic significance, popularized by writers such as Peter Ackroyd and Ian Sinclair. 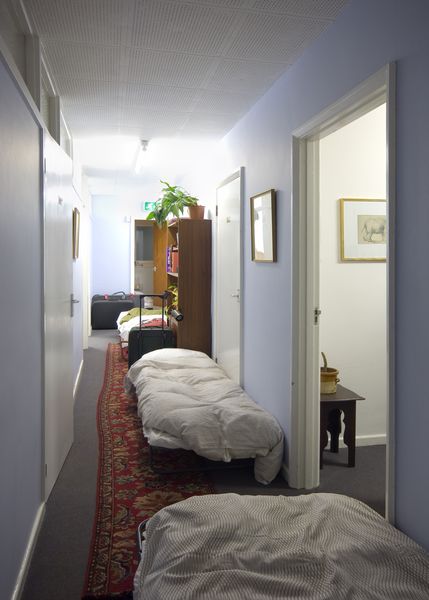 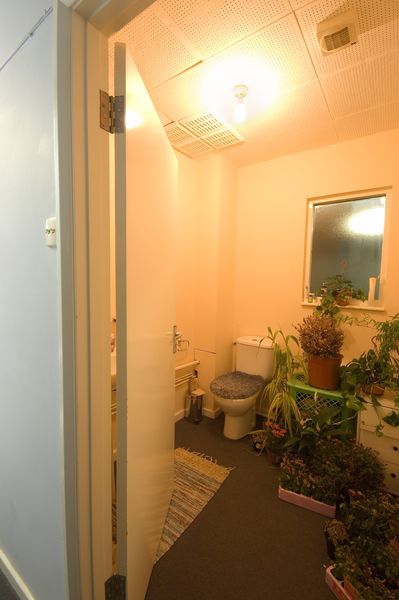 It was hard not to feel that Büchel’s engagement with the local context remained on a cosmetic level, and this raised some thorny interpretation issues. Brick Lane and the surrounding Whitechapel area is home to a large number of mosques, and certainly a fair amount of businesses similar to the second-hand electrical shop Büchel had created for ‘Simply Botiful.’ But, obviously, not every single Muslim living in the UK is a rabid fundamentalist hell-bent on destruction and, without wanting to sound puritanically politically correct, for Büchel to play with these themes in the heart of Whitechapel is bordering on insensitivity (though not half as simplistic as the equation of global jihad with 1930s Fascism made by the ‘Mein Kampf’ translation). The juxtaposition of certain narrative devices further complicated the reading of the installation; the use of Heavy Metal as flat signifier of threatening, male sub-culture for example, or the undetermined nationalities and faiths (would the same people reading ‘Mein Kampf’ in Arabic be ogling pornographic images of Western women? And is every blue-collar worker a porn-obsessed boxing fan?).

Like the Paul McCarthy exhibition that inhabited Coppermill before Büchel’s installation, the scale of ambition was undeniably impressive. Yet the very things that enable such a level of production – the funding and logistical support – made Simply Botiful seem at odds with the reality of the world it purported to depict, its sheer success puncturing its own fiction. (Such were the visitor numbers that the likelihood, whilst visiting, of bumping into a friend or colleague, was pretty high – ‘Oh you work for a shadowy Islamo-Fascist archaeology and electrical repair unit too? Fancy that!’) ‘Simply Botiful’ was more a representation of today’s Western fears of other cultures as they exist in the tabloid imagination, than the messy, complex reality that’s out there.

The museum as a shelter for refugees: Christoph Büchel at SMAK, Ghent reviewed by Metropolis M

Christoph Büchel’s ‘From the Collection | Verlust der Mitte (Loss of Center)’ is an immersive, multi-part, total...

The sleeping security guard is already the star of this year's edition of Frieze. He sits, we assume he sits there...