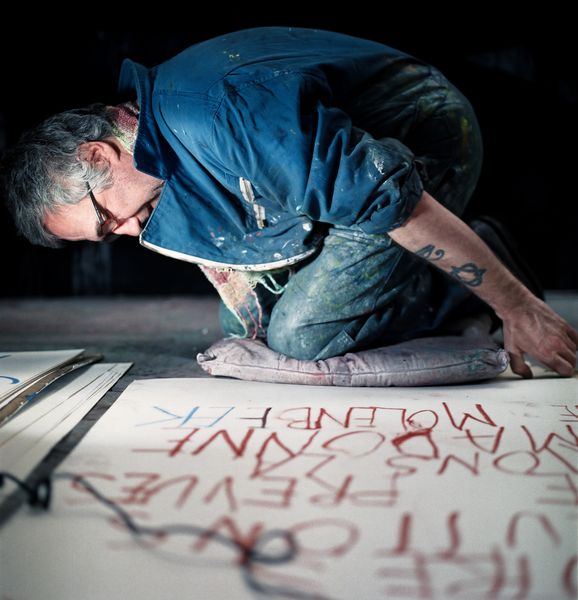 On the occasion of ‘Philippe Vandenberg. Kamikaze’ at Hamburger Kunsthalle, this series of short video clips feature the artist commenting on important motifs, techniques and subjects of his work. These intimate portraits, by filmmakers Guillaume Vandenberghe (son of the artist) and Neel Cockx, explore one of the most significant Belgian artists of the last forty years. Vandenberg's emergence in the 1980s as an uncompromising painter of note coincided with a wider change in attitude towards representational painting and the rise of a new Neo-Expressionist style across Europe and the United States.

In this exhibition, Hamburger Kunsthalle present the most extensive exhibition of Philippe Vandenberg’s work to date, comprising some 80 paintings and over 120 drawings and prints. This is the first solo show at a German museum to feature the Flemish artist, who was highly acclaimed in his home country and whose radical and unsparing oeuvre is just now being discovered by a broader international audience.

The exhibition title ‘Kamikaze’ (divine wind) is a term we know from Japanese suicide air missions during the Second World War, or in a figurative sense as a description of self-defeating actions. Philippe Vandenberg chose to elevate this concept to his central artistic principle. For him, ‘kamikaze’ meant a form of creative destruction that would enable something new to arise from the ashes of what went before. Radical changes in direction and agile thinking are the preconditions for this kamikaze mind-set. Or, as the artist once put it: ‘You have to stay mobile, absolutely mobile.’

Throughout his career, Vandenberg’s iconography drew on symbols from an immense literature of art history, biblical stories, myths and contemporary events. Crucifixes, ladders, boats, tunnels and bridges were leitmotifs for a way for seeing the world as a cyclical journey without end. Towards the end of his life, his work became increasingly monochromatic and the manic energy of the competing symbols was replaced simply with a lexicon of phrases he would scrawl in capitals on the surface of the paintings and drawings.

Vandenberg was a prolific draughtsman and his sketchbooks are filled with page after page of beautifully articulated drawings. Often one book would contain a series of around 50 drawings, each of which was a variation on a theme, as though the process was an exercise to be probed in the pursuit of authentic expression. This expression can be seen in the drawings on display in the exhibition at The Hamburger Kunsthalle.

The exhibition contains a highly diverse and multifaceted body of paintings and works on paper: figurative depictions are gradually usurped by abstract geometric overpaintings and vice versa, while monochromatic and narrative works share equal ground. Literature and art history, myths and legends as well as current world events were all fodder for Vandenberg’s art. In his final years, the artist produced images of arresting intensity peppered with words and sentence fragments. His works set out to investigate the human condition and great life themes such as memory and forgetting, hatred and violence, cruelty and agitation as well as interpersonal closeness and a sense of belonging. By turns stimulating, disturbing and touching, these images are an invitation to profound introspection.

Philippe Vandenberg was born in Ghent, Belgium, in 1952, and committed suicide in 2009.

Philippe Vandenberg: The Cult Artist Who Demanded Total Freedom, Whatever The Cost reviewed by Artsy

‘During my youth, I was forced into a system I didn’t believe in,’ Philippe Vandenberg told fellow artist Ronny...

At heart of the Philippe Vandenberg’s work is a primal poetry, one that emerges both from the images he brought to...

Philippe Vandenberg in his studio, 1985

‘I am an artist of emotion and reflections. I don’t mean sentimentalism, the emotional, but the shock of the emotion...