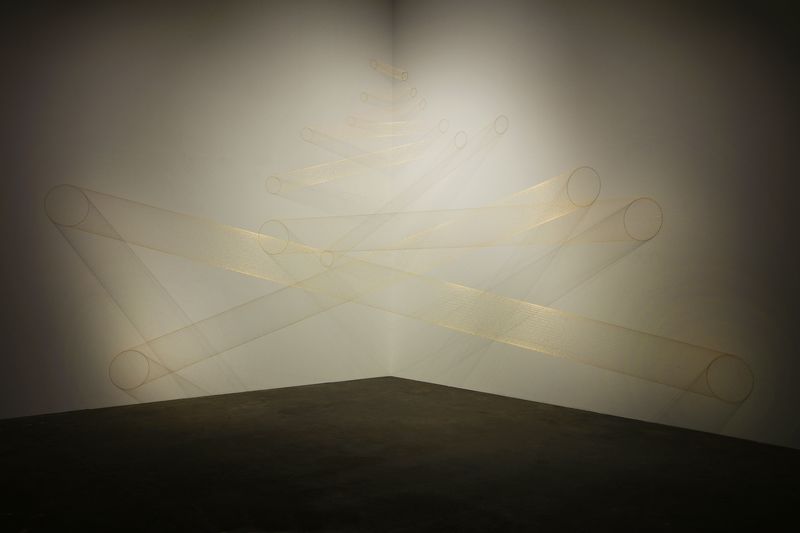 'Of all of Pape’s works, the most emblematic ones, those that best synthesize her artistic process, are her Ttéias, the first of which was conceived in 1979.'

Lygia Pape (1927 – 2004) was an influential Brazilian artist, active in the Concrete and Neo-concrete movements in the Brazilian art world. Initially inspired by the formal geometric abstraction of Concrete art, which arrived in Brazil in 1951, she started out by making geometric constructions. However, she began to tire of the severity of this prescriptive art form, and became a founding member of the Neo-Concrete movement in 1959, which was dedicated to the inclusion of art into everyday life. Along with fellow members Lygia Clark and Hélio Oiticica, Pape ‘aimed to break with artistic categories and to incorporate into abstract art new verbal and expressive formulas.’ (1)

This new movement was still based on the non-representational tenets of Concrete art, but the Neo-Concretists transformed Concrete art’s geometric shapes into organic three-dimensional objects, designed to be manipulated by participants and to be experienced sensorially. Pape’s practice was comprised of sculpture, drawing, engraving, filmmaking, and installations, and often relied on the intellectual and physical participation of the spectator. Many of her works were created in response to the political repression growing in the late 1960s and reflected the artist’s strongly critical views on Brazil’s elite. Pape‘s late works focus on the depiction of emotion and sensation, and have been described by Hélio Oiticica – a contemporary of Pape’s – as ‘permanently open seeds.’ 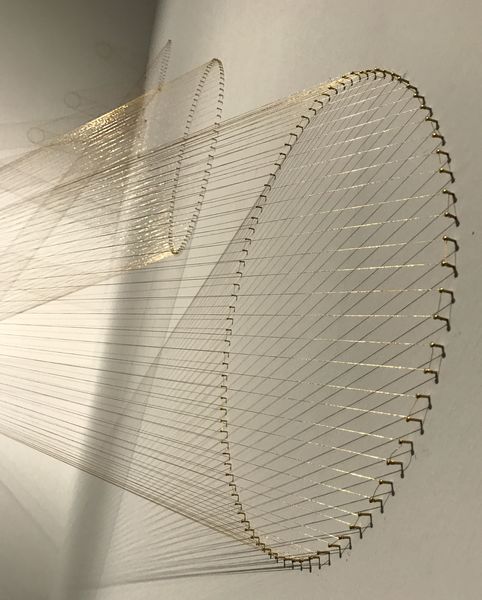 Of all of Pape’s works, the most emblematic ones, those that best synthesize her artistic process, are her Ttéias, the first of which was conceived in 1979. Ttéias are constructed by the geometric installation of silver or gold threads in a space, either from the floor to the ceiling or across the corner of a room. They delineate volumes and achieve visually powerful and magical effects, charging the space with a sense of the indefinable, the immaterial. The corner installations cast strong shadows of lines across the walls in many directions, creating phantom groups of lines that don’t exist in reality. The groups of thread that course through space are also staggered, and some actually intersect others, literally weaving through the air. Other groups of threads, through the effect of lighting and tricks of perspective, simply appear to intersect: the installations blend the real and the imaginary, letting the viewer discover the work through interaction and inspection. The word ‘Ttéia,’ which Pape created, is an elision of the Portuguese word for ‘web’ and ‘teteia,’ a colloquial word for a graceful and delicate person or thing.

This magisterial body of work was conceived in 1976, but was really the result of experiments that Pape began in 1977 with her students from the School of Visual Arts of Parque Lage, an art school in the middle of a park in Rio de Janeiro: she tied strings around trees and wove them through the natural environment, having the strings intersect and engage not only with each other, but with her students who were encouraged to walk through them. The first official Ttéia was created in 1979 after her program in Parque Lage came to an end. Pape often revisited themes that she had explored years, even decades earlier. In such a vein, the Ttéias are thematically very similar to her early body of woodblock prints from the 1950s and 1960s, in which incised lines seem to weave themselves in and out, creating a sense of movement and space in a two-dimensional plane. Both series mark the limits of a long trajectory. Pape created distinct bodies of Ttéias, those with linear groups of threads are called 1A, those with tubular groups of threads are called 1B, and tower, or floor to ceiling, Ttéias are called 1C.

Ttéia 1, B (2000 / 2018), mounted for the first time at Unlimited, is an outstanding example of the series. The work is a corner Ttéia, with nine groups of gold threads flowing from wall to wall, tubular in shape (a 1B piece). Each glimmering band of gold light casts two shadows down the walls towards the floor, creating the optical effect that there are, rather than nine, a total of twenty-seven bands of threads charging around the corner of the room. With nine groups of threads and covering a large floorplan, the work is the second largest corner Ttéia that Pape created, and captures the ephemeral nature of Pape’s practice perfectly.

The Ttéias represent Lygia Pape at the height of her powers. As Luiz Camillo Osorio puts it upon seeing a Ttéia installed, the threads ‘stretched diagonally … Everything was immaterial, charging the space with an unforgettable spiritual vibration. It was the culmination of her career. Rigor, silence, seduction, and precariousness were combined in the poetic construction of her work, lending it a sort of tragic optimism, an almost metaphysical belief in Brazil’s capacity to invent itself as a single nation.’ (2)

To break through the Modernist cube: on Lygia Pape at the Met Breuer reviewed by The Art Newspaper

About halfway through ‘A Multitude of Forms,’ Lygia Pape’s first career survey in the United States (on now at the...