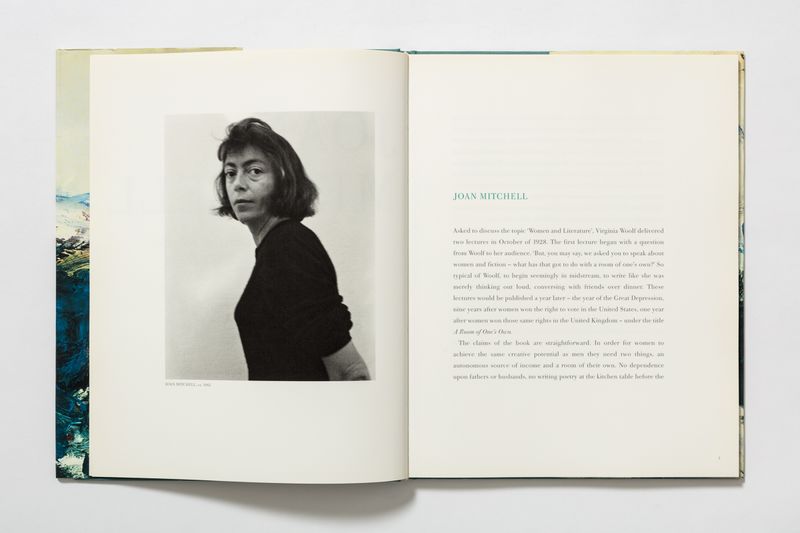 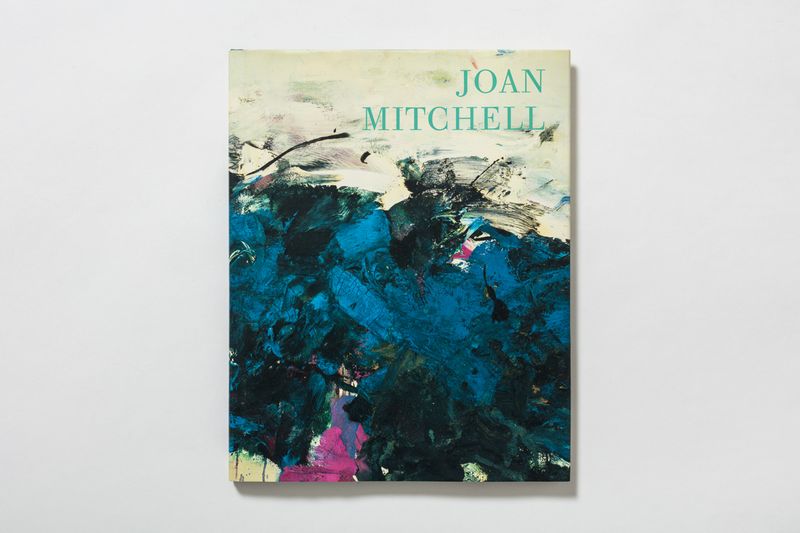 In a photograph dated ca. 1962, Joan Mitchell gazes directly at the photographer. Her expression is not quite legible, but her eyes hold you with their intensity. This portrait opens Helen Molesworth’s essay, which is excerpted below and appeared in the 2007 catalog of Mitchell’s paintings from this period, ‘Joan Mitchell: Leaving America, New York to Paris, 1958–1964,’ published in collaboration with the Joan Mitchell Foundation and Cheim & Read.

We partnered with Steidl on several projects from 2006 through 2010, publishing under the imprint Steidl Hauser & Wirth. Steidl is known for their technically immaculate books, for which founder Gerhard Steidl oversees all processes from design to production to printing. This publication is no different in its execution: the dust jacket features a detail of one of Mitchell’s paintings, cropped so as to directly plunge the reader into the artist’s frenetic world. All other aspects of the book’s design work in support of that immersion, from the sensuously ribbed end paper, to the understated jewel tone of the hardback’s cloth binding, the title stamped on the cover and spine in an inky hue of the same family, several shades darker. So much of Mitchell is embodied in her work that the catalog’s task is simply to support her poetic fury, to position the reader to be ready to accept what her works have to give. This title was published in the summer of 2007 on the occasion of the exhibition ‘Joan Mitchell. Leaving America, New York to Paris, 1958–1964’ at Hauser & Wirth London, Piccadilly. 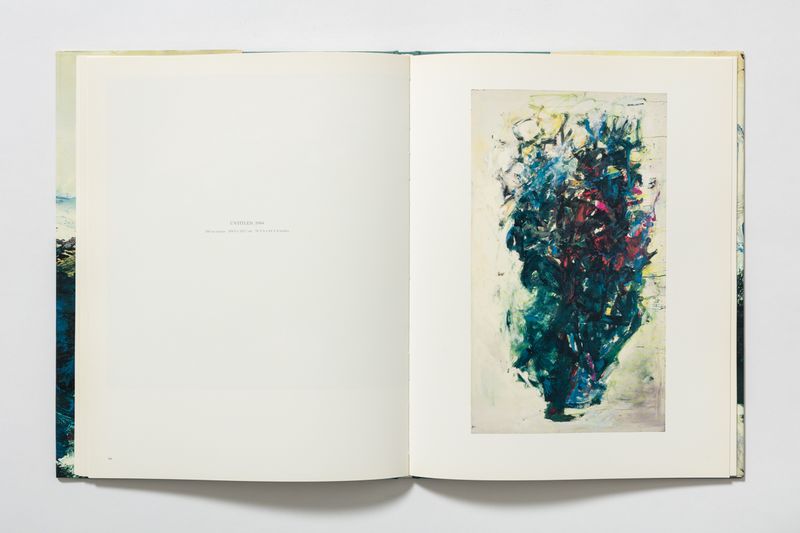 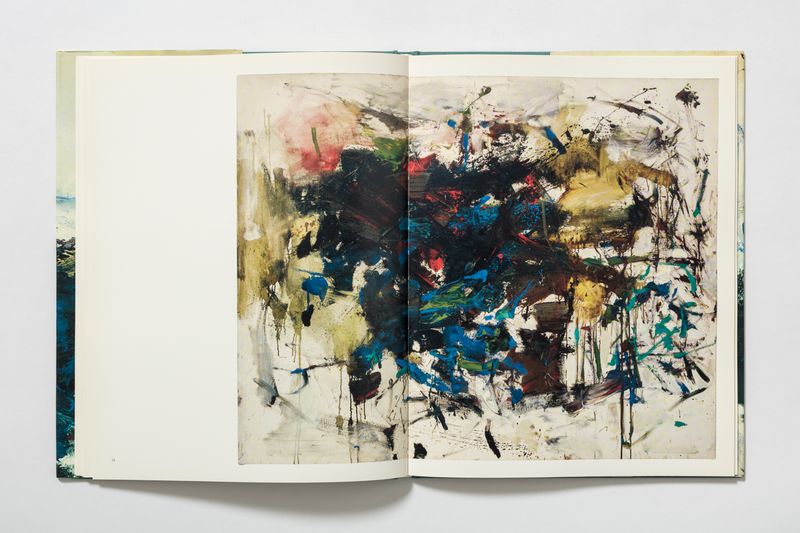 Asked to discuss the topic ‘Women and Literature’, Virginia Woolf delivered two lectures in October of 1928. The first lecture began with a question from Woolf to her audience. ‘But you may say, we asked you to speak about women and fiction – what has that got to do with a room of one’s own?’ So typical of Woolf, to begin seemingly in midstream, to write like she was merely thinking out loud, conversing with friends over dinner. These lectures would be published a year later – the year of the Great Depression, nine years after women won the right to vote in the United States, one year after women won the same rights in the United Kingdom – under the title ‘A Room of One’s Own.’

As women struggled for social equality they also strove for an ineffable sense of humanness, access to the full range of emotional and creative ambitions that help to define who we are.

The claims of the book are straightforward. In order for women to achieve the same creative potential as men they need two things, an autonomous source of income and a room of their own. No dependence upon fathers or husbands, no writing poetry at the kitchen table before the children awake. The slim volume was to become a lodestar of the feminist movement. As women struggled for social equality (access to education, equal pay, and childcare) they also strove for an ineffable sense of humanness, access to the full range of emotional and creative ambitions that help to define who we are. The American painter Joan Mitchell was lucky; throughout her life she possessed what Woolf maintained were those two essential ingredients for women’s creativity. And still, it was not easy. Asked late in life by an interviewer what was the most difficult aspect of her career, she said ‘Well… I’m a girl, a woman, female’, as if the enumeration of gender might make it more understandable, less infuriating. 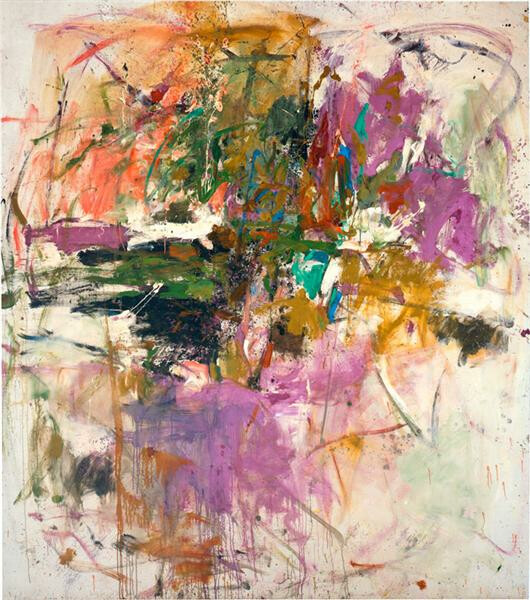 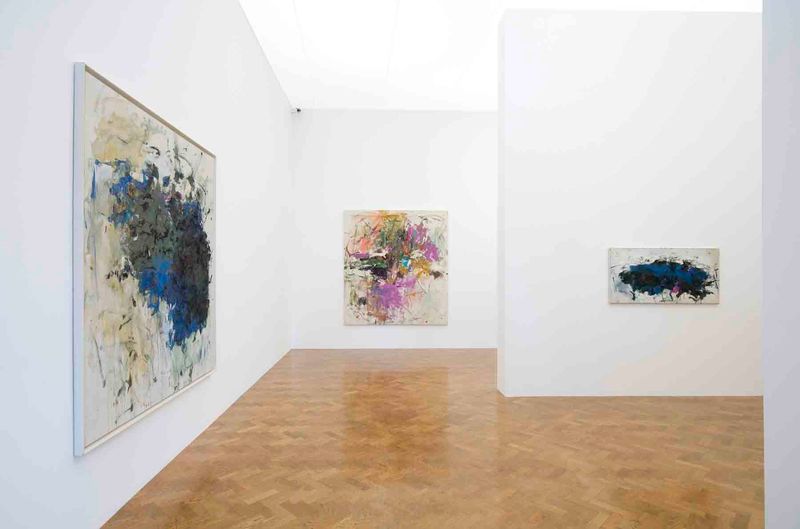 Joan Mitchell was part of the generation that existed in a curious limbo between the first generation of suffragette feminism and the second wave of feminism that swept the United States and Europe in the later 1960s and 1970s. Born into an affluent family in Chicago in 1926, Mitchell was blessed with parents well disposed to culture. Her mother was a co-editor of ‘Poetry’ magazine, the first American publisher of important modernist poets Ezra Pound and T.S. Eliot. Her father was a physician, but also, more importantly for Mitchell, a life-long amateur artist who took her to sketch at the zoo and the Field Museum, and introduced her to the magnificent collections at the Art Institute of Chicago. Like many well-off and intelligent women of her generation, she attended Smith College, a woman’s college renowned for its strong English department and well-appointed museum. Yet it wasn’t until Mitchell visited an artists’ colony in Michigan during the first two summers of her college years that the strong imperative to become an artist took hold. Here she painted out of doors for the first time, experimented with lithography, as well as drew from life. As a result of this experience she decided to transfer from Smith to the Art Institute of Chicago to pursue a full-time education as an artist.

Mitchell’s canvases always maintained the painterly logic of figure-ground composition typified by their strong centre, a place from which energy both emanates and is absorbed.

As was true of so many American artists of this moment, New York beckoned, and, by 1947, just a few years after graduation, Mitchell moved into a small apartment at the base of the Brooklyn Bridge. She quickly joined the powerful artistic milieu of the moment – attending a class taught by Hans Hofmann and visiting exhibitions of Jackson Pollock and Arshile Gorky. She became friendly with Willem de Kooning and Franz Kline. She was, in essence, utterly part of the artistic moment, one defined by the formation of abstract expressionism. Her early 1950s canvases are marked by a distinctly European-inflected cubism, replete with sharp angles and a shard-like fractured picture plan that none the less revealed recognizable urban forms (e.g. bridges and skyscrapers).

She quickly won success as an artist. Her first exhibition received positive reviews, and between 1953 and 1965 she showed almost annually at the famed Stable Gallery. The mid-1950s found Mitchell carving out her own painterly language, in part by both assimilating and rejecting some of the central tenets of abstract expressionism. For instance, Mitchell’s canvases never completely exhibit abstract expressionism’s all-over compositional format and emphasis on flatness. Far from the rhythmic uniformity of Pollock’s drip paintings or the serenity of Rothko’s fields of color, Mitchell’s canvases always maintained the painterly logic of figure-ground composition typified by their strong centre, a place from which energy both emanates and is absorbed. Her repeated use of a white border intensified the centrality of her focused compositions. This border is never precise, or rigidly controlled; rather it is an honest acknowledgement of the ground of the picture – the canvas and its primer forming the frame for the activity of painting. So too it is a philosophical as well as aesthetic claim that, unlike the homogeneity implied by the all-over composition, some things are more important than others. 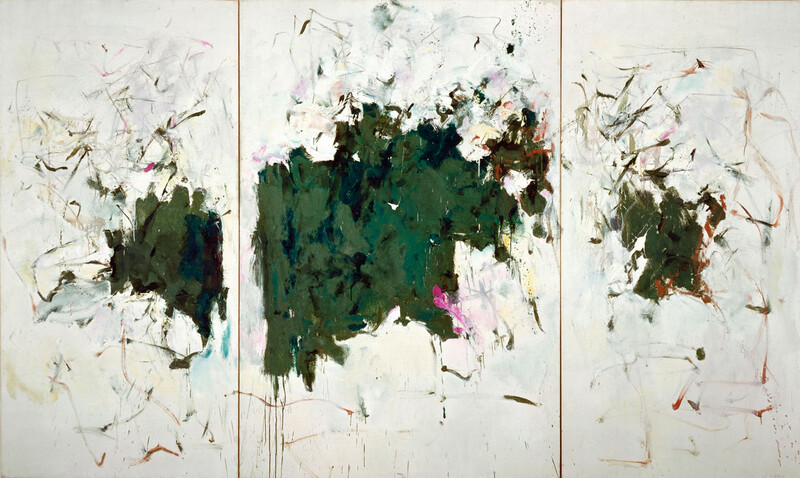 Mitchell’s use of white as a framing device also amplified her extraordinary palette, one that traversed the full spectrum of colors. In ‘La Chatière’ (1960) we see a study in greens and reds. At the edge of the red passage on the right, Mitchell allows glimpses of the yellows and oranges that went into creating the exuberant cherry-tomato red, but then at the lower edge that red is allowed to take on the tingle of dried blood. The jaunty dashes of red in the upper-left corner, on the other hand, are like smears of new lipstick, a sexy form of trial and error. Just as red is run through its paces, so too flesh tones abound. Yellow is submerged, green edges in closer to the centre, mixed with jet black and a fecal brown. The whole flavor of the human body is disassembled into its component colors.

In ‘Joan Mitchell: Portrait of an Abstract Painter,’ a 1992 documentary program by Marion Cajori, Mitchell discusses her highly unique sense of color. Asked what the colors mean, she defiantly retorts that they don’t mean anything, they simply are, they exist as letters in the alphabet exist. Pushed by the interviewer to clarify this point, Mitchell practically shrieks that green is ‘A’, as if any one should be able to see that. As the camera pans to an almost primitive drawing of the alphabet in which each letter is accompanied by swatches of color, Mitchell confesses that this cross between the linguistic and perceptual, a kind of profound synesthesia, existed for her even as a child. 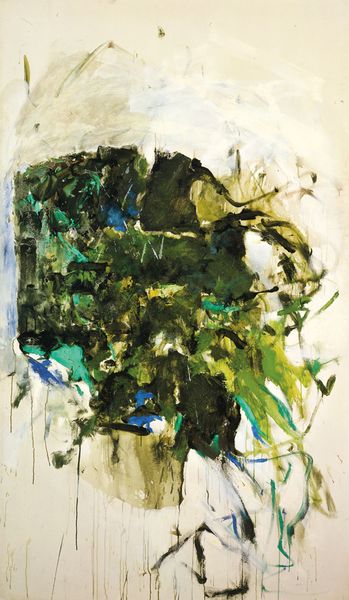 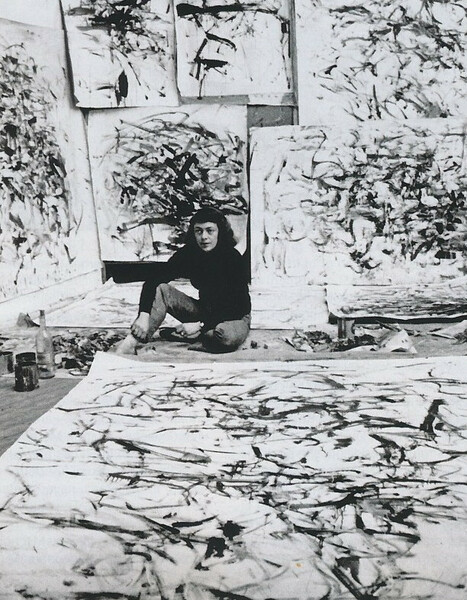 In addition to Mitchell’s exuberant palette, in which color is used linguistically, the paintings also deploy an alphabet of painterly gestures. In almost every canvas the viewer can witness a heterogeneity of strokes: from dense passages of bottomless color to built up smears of paint, to thin washes wiped down with turpentine, to rough expressionistic zig-zags, to delicate calligraphic lines; and from deliberate passages that balance the overall composition to chance drips and splatters that act as indexical records of each picture’s making. The overall effect of both her use of color and application of paint is that the compositions feel built-up, considered, and intensely achieved. Her deployment of painting’s elemental building blocks – color and stroke – result in paintings that are analogous to poetry. If in poetry language is both sharpened and distilled, both loaded with and emptied of meaning, then in Mitchell’s canvases the elements of paintings – paint, color and canvas – are both themselves and at the same time replete with expressive connotation. This is the dialectic struggle waged by Mitchell’s work.

Perhaps the most prevalent instance of this dialectic is the consistency with which Mitchell’s paintings are described as either lyrical or filled with rage – ideas hardly commensurate with one another. And yet both are true. Mitchell’s paintings undeniably evoke the sensation of landscape – both as a vista but also as a palimpsest of memories (of light, color and air) and of feelings (wonderment, beauty and awe). The paintings evoke not only the specificity of a given place and time, but also a more universal sense of being outside, of the simplicity and pleasure of being in nature. (This is why the time in the Hamptons and in the French countryside was so important to her work.) And yet, despite this lyricism the paintings – especially those from the early 1960s – can be accurately described as being filled with or fuelled by rage.