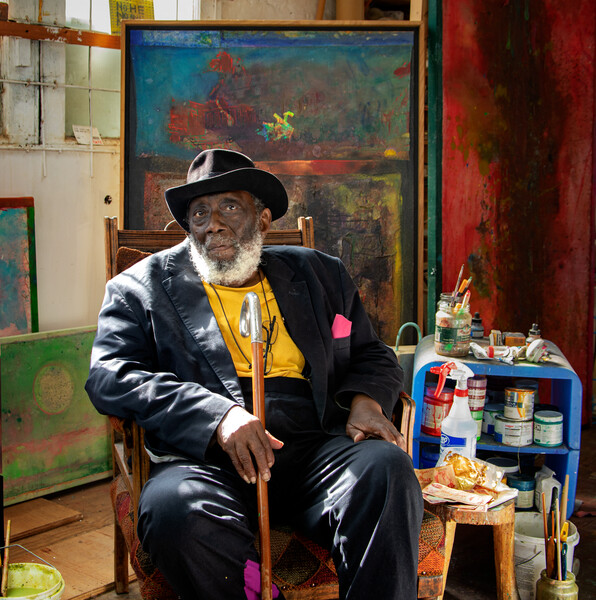 Born in Guyana in 1934, Frank Bowling moved to London when he was 19. He went on to study painting at the Royal College of Art alongside artists David Hockney and R.B. Kitaj.

Since the 1960s, he has developed a highly individual language of painting, which emerged from expressionistic figuration and pop art, to autobiographical elements of the artist’s socio political concerns fusing abstraction with personal memories. At the age of 87, Bowling works every day in his South London studio, accompanied by his wife, Rachel, other family members and friends, forever driven by his fascination with exploring the vast and radiant possibilities of paint.

In 1966 Bowling relocated from London to New York, where he pushed his work in new directions. He met the artist Jasper Johns and engaged in dialogue with his contemporaries, including Jack Whitten, Mel Edwards, Al Loving, and Daniel LaRue Johnson. In 1969, Bowling organized, curated, and wrote the catalogue essay for the notable exhibition, ‘5+1’, at the State University of New York, Stony Brook, and Princeton University, which showcased the work of five African American abstract artists as well as his own recent paintings. He expressed frustration at the critical invisibility of Black artists and the narrow parameters by which his art and that of his peers was being assessed. Through his writings, as a contributing editor of Arts Magazine (1969-1972), he resisted what he saw as the reductive categorization of ‘Black Art’ as purely political in subject matter, staking a claim for abstraction.

In 1971, Bowling had a solo exhibition at the Whitney Museum of American Art in New York, where he showed his iconic ‘Map Paintings’. A 1986 exhibition at the Serpentine Gallery in London focused on his sculptural paintings of the 1980s. A turning point in Bowling’s career came in 2003 when his ‘Map Paintings’, which had been in storage and unseen since the early 1970s, were the centre-piece of the exhibition ‘Faultlines: Contemporary African Art and Shifting Landscapes’, at the 50th Venice Biennale. This work drew much attention and paved the way for him becoming a Royal Academician in 2005.

Bowling exhibited ‘Works on Paper’ at the Royal Academy of Arts in London in 2011. The following year, Bowling had a one-room exhibition of his ‘Poured Paintings’ (1973 – 78) at Tate Britain. His major solo exhibition, ‘Mappa Mundi’, opened at the Haus der Kunst, Munich, in 2017, and toured to the Irish Museum of Modern Art in Dublin, Ireland and the Sharjah Art Foundation in Sharjah, United Arab Emirates, in 2018. In 2017, two of Bowling’s ‘Map Paintings’ were included in the landmark exhibition ‘Soul of a Nation: Art in the Age of Black Power’, which began its international tour at Tate Modern before travelling to the Brooklyn Museum and from there to Los Angeles, San Francisco and Houston. In 2019, Bowling’s long-awaited and highly regarded retrospective at the Tate Britain – subtitled ‘The Possibilities of Paint are Endless’ – showcased his entire six-decade long career. Bowling is the subject of a BBC documentary, ‘Frank Bowling’s Abstract World’, which coincided with the opening of the Tate Retrospective.

The work in the London exhibition reflects Bowling’s six-decade experimentation with the materiality of painting through a body of work that has constantly pushed the boundaries of abstraction. It spans a 40-year period of the British artist’s career and includes a new selection of works.

See, ‘May Shimmer’ (2018), a canvas of muddy-pink tones surrounded by vibrant yellow, and green made visually dynamic by light refracted from bits of jagged wood wool packing material embedded in the paint. In this work, Bowling achieves a delicate radiance by using drops of pearlescence, a pigment which produces shimmering and iridescent effects. 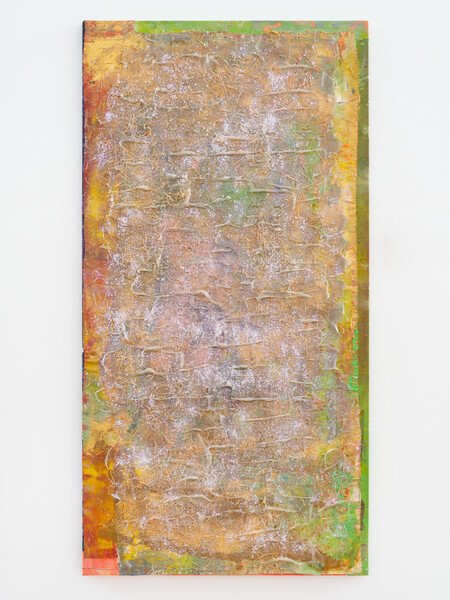 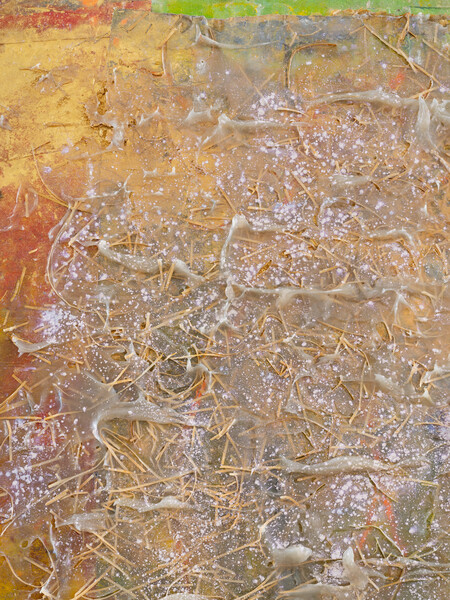 What are the main themes in Frank Bowling’s work?

After moving to New York in 1966, Bowling’s commitment to modernism meant he was increasingly focused on material, process and colour, so that by 1971 he had abandoned the use of figurative imagery. Bowling’s iconic ‘Map Paintings’ (1967-71), which include the stencilled landmasses of South America, Africa and Australia, embody his transition from figuration to pure abstraction. As a contributing editor at Arts Magazine (1969-1972), Bowling rejected the idea that ‘artists who happen to be black’ should be making overtly political or protest art and defended those engaged in abstraction. His critical writings represent a significant contribution to intellectual debates on ‘Black Art’.

His sculptural paintings of the 1980s include embedded objects and thickly textured canvases, and have been described as evoking landscape, riverbeds and geological strata. Bowling shares Turner and Constable’s preoccupation with light, which is never more evident than in his expansive ‘Great Thames’ paintings of the late 1980s.

His themes are a direct response to his life and experiences. London is the city where Frank trained as a painter, learned to be an artist and achieved early notoriety. New York is the city where, at the height of the Civil Rights movement, he felt compelled to migrate to and became involved in discussions of ‘Black Art’, a place of renewed energy and ideas where he sought to find new ways of making art.

Frank Bowling combines, figurative, symbolic and abstract elements to make paintings that relate to the movements Abstract Expressionism and Colour Field Painting. As an abstract painter, Bowling uses a rage of methods to make his work. In his earlier works he often used stencilling or screen-printing to add maps or imagery from his family history. From 1973 to 1978, he experimented with ideas of chance and ‘controlled accidents’, pouring paint from a two-meter height to create his visually arresting ‘Poured Paintings’, as an expansion from colour field painting.

He later went on to explore light, colour, and geometry specifically. He incorporates less traditional materials such as the use of ammonia and multi-layered washes, to thick impasto textures, acrylic gels, collage, stitched canvas and metallic and pearlescent pigments. 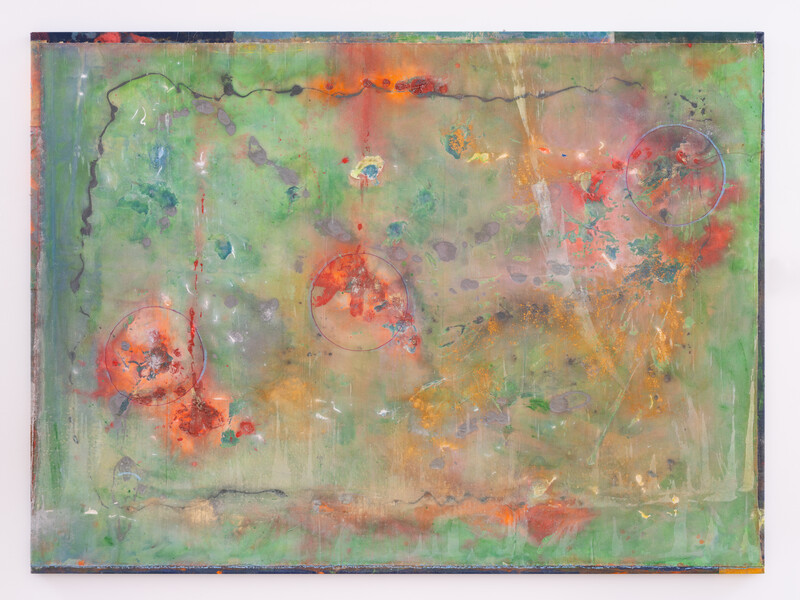 Where does he get his inspiration?

Bowling divided his time between London and New York, maintaining studios in both cities. This transatlantic orientation was to see his early engagement with expressive figuration and pop art shift to an immersion in abstraction which continues in his practice today. Visible in his work are the legacies of both the English landscape tradition and American abstraction from which Bowling honed a distinctive vocabulary, combining figurative, abstract and symbolic elements. As Bowling has explained, ‘I was always very conscious of scratching out and of new interpretations replacing the old; updating traditions.’

Over the years, the points of reference in his work reflect Bowling’s interest in a wide scope of art history, from Constable and Turner to Mondrian, Barnett Newman and Mark Rothko. This transatlantic orientation was to see Bowling’s early engagement with expressive figuration and pop art shift to an immersion in abstraction which continues in his practice today. 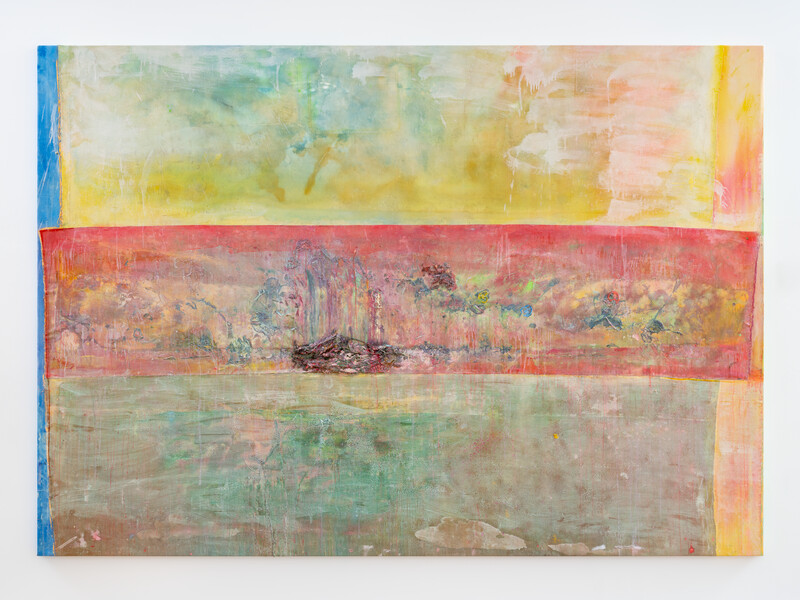 Abstract expressionism is the term applied forms of abstract art, is often characterised by gestural brush-strokes or mark-making, and the impression of spontaneity.

A broad term for art created by American artists with African ancestry.

Black Art is a broad term describing visual art created by artists who are Black.

The Black Arts Movement (BAM) was an African American-led art movement, active during the 1960s and 1970s incorporating predominantly artists and writers.

The civil rights movement was a struggle for social justice that took place mainly during the 1950s and 1960s for Black Americans to gain equal rights under the law in the United States.

Colour field painting describes the work of abstract painters working in the 1950s and 1960s characterised by large areas of a more or less flat single colour.

Modernism refers to the twentieth century movement in society and culture that sought a new alignment with the experience and values of modern industrial life. Building on late nineteenth century precedents, artists around the world used new imagery, materials and techniques to create artworks that they felt better reflected the realities and hopes of modern societies.

The Pop art movement emerged in the United Kingdom and the United States during the mid-to late-1950s. The movement presented a challenge to traditional art by including imagery from popular and mass culture, such as advertising and mass-produced objects.

Mel Edwards
Mel Edwards (born 1937) is an American artist whose artwork has political content often referencing African American history, as well as the exploration of themes within slavery.

Jasper Johns
Jasper Johns (born 1930) is an American painter, sculptor and printmaker whose work is associated with abstract expressionism, Neo-Dada, and pop art. He is well known for his depictions of the American flag.

Jack Whitten
Although Jack Whitten (1939 – 2018) initially aligned with the New York circle of abstract expressionists active in the 1960s, his work gradually distanced from the movement’s aesthetic philosophy and formal concerns, focusing more intensely on the experimental aspects of process and technique that came to define his practice. See www.hauserwirth.com/artists/2853-jack-whitten

Ask questions to prompt a discussion on colour?

Here are some questions you can ask your class to start a discussion about colour:

Draw some familiar objects e.g. a vegetable or an animal. Colour them in, in unnatural colours. Colour a house green or a dog blue. What effect does it have on the drawing?

Frank Bowling is an artist who believes that colour is as important in telling a story as the subject he paints and uses splashes, drips and smudges to create different effects. His mainly uses colours, as opposed to objects and figures, to create emotion. Can you make a painting to show and emotion? What emotion would you choose and what colours would you use?

Compare Frank Bowling’s use of colour to that of an artist from a different period in art history. For example, how is colour used in paintings from the Renaissance period

Frank Bowling’s paintings have a geometrical structure that is easy to miss unless you look for it. As a teenager, he worked with his uncle, a cabinet maker, where he learned about how to use circles and triangles inside squares to create stability in a piece of furniture. He has sustained this interest in geometry throughout his career. The shape of the canvas – square or rectangular – helps to shape the geometry of the painting. If you look closely, you can see circles inside squares, diagonal lines, straight lines and curves.