The Making of Hauser & Wirth Menorca

Iwan and Manuela Wirth, Luis Laplace, Piet Oudolf and other key figures tell the story of our new art center on Illa del Rei in the port of Mahon

A destination to experience art in connection with education, nature and conservation, Hauser & Wirth Menorca is located on an island in Mahon harbour, comprising eight galleries in the repurposed 18th century outbuildings of a naval hospital. ‘Art is at the heart, but it is also a deeply inclusive model’, says Iwan Wirth. ‘It is a holistic concept that, by nature, is community-based.’

With an exhibition space spanning eight galleries, our newest location also features an outdoor sculpture trail with works by Louise Bourgeois, Eduardo Chillida, Joan Miró and Franz West, a garden designed by Piet Oudolf incorporating native perennials and planting suited to the Mediterranean climate, and on-site restaurant Cantina serves seasonal and local produce. Focusing on both education and sustainability, we run a series of educational activities to engage both the local community and visitors with contemporary art through screenings, talks, and workshops. 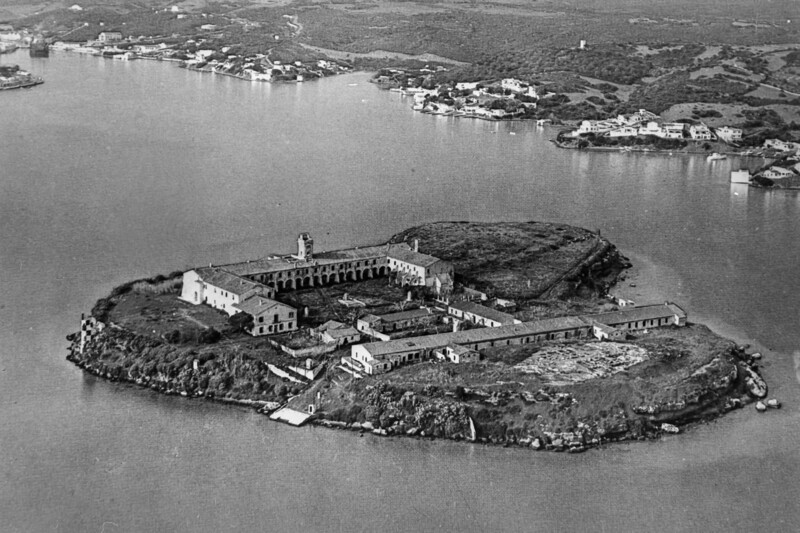 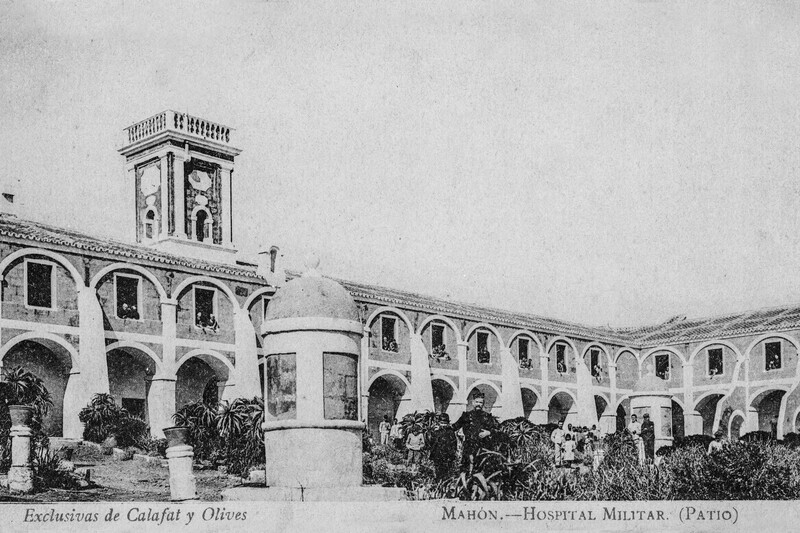 Illa del Rei is home a decommissioned hospital founded by the English navy in 1711. The historical building forms a u-shape, facing southeast and surrounding a square and a chapel. Alongside the hospital are a group of outbuildings created for support functions. The remains of a Paleochristian basilica dating from the sixth century AD are located close to the hospital and was discovered in 1888.

After the hospital fell in disuse, the site was abandoned and the buildings deteriorated. The Foundation Hospital de l’Illa del Rei was established in 2005 to protect and conserve the historical site. Since then, hundreds of international volunteers have worked with that end, raising funds and providing materials and a dedicated workforce on a weekly basis.

‘A group of dedicated volunteers have spearheaded the restoration of its 18th-century hospital buildings for over 15 years,’ explains Manuela Wirth. ‘We are deeply inspired by their efforts to protect the environment and heritage, and proud to join them as custodians of the island.’ 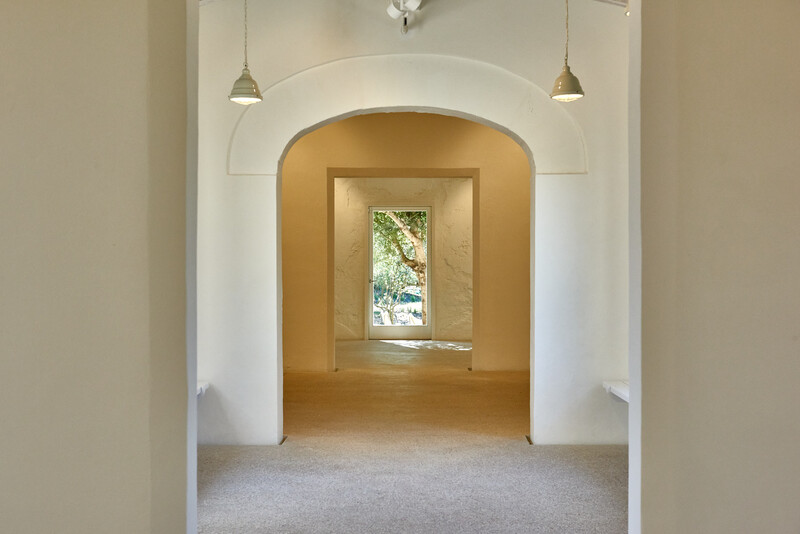 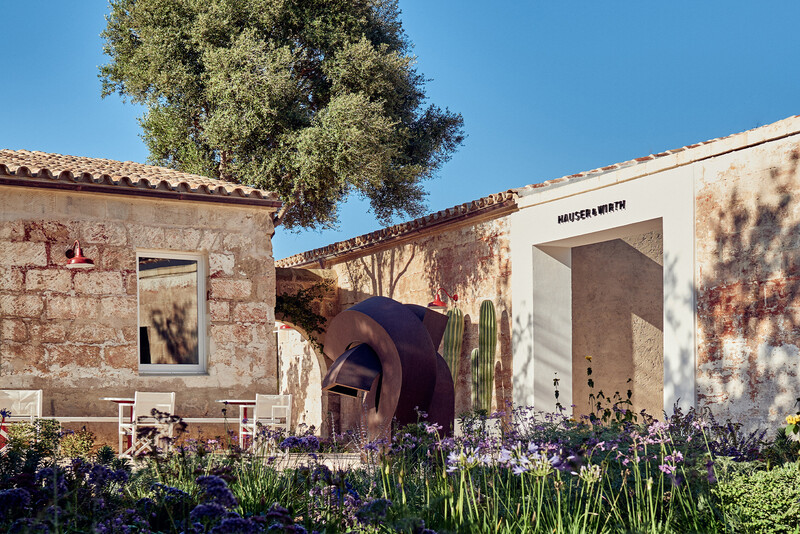 The conservation project at Hauser & Wirth Menorca has been led by Laplace, the Paris-based studio run by Luis Laplace and Christophe Comoy, repurposing the existing historical outbuildings into a 1,500 sq.m. art center. Laplace’s approach has resulted in an inspiring environment to experience contemporary art, which enhances the history and naval qualities of the building. ‘We visited several naval buildings around Menorca to understand the origins of the building,’ says Luis Laplace. ‘The spaciousness of the galleries, the restored arches and the skylights and windows pay an homage to that origin.’

In the gallery building, the central patio organizes the two sequences of gallery spaces, with a rear opening framing a native fig tree. Laplace’s sensitive approach to conservation uses local architectural elements such as tiled roof and terrazzo flooring, made on site with Menorcan stone. The project incorporates two small annexes, restored using the local sandstone, ‘marès’. The interior architecture features the restored original wood beams, and the walls across the two buildings have been washed with traditional lime plaster, leaving the scars on the sandstone walls visible.

‘We visited several naval buildings around Menorca to understand the origins of the building. The spaciousness of the galleries, the restored arches and the skylights and windows pay an homage to that origin.’—Luis Laplace 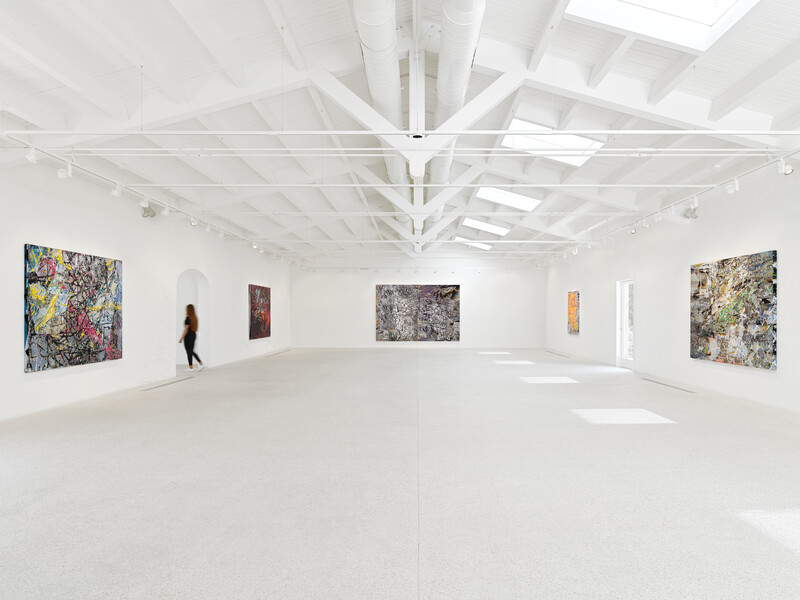 The inaugural exhibition it Hauser & Wirth Menorca is by Los Angeles-based artist Mark Bradford. Continuing his career-long exploration of the systems that oppress marginalized populations, ‘Masses and Movements’ features work rich in both formal and allegorical complexity, reasserting the importance of abstraction to understand the world we live in and confirming his place among the most important artists working today. Integral to the exhibition is a new social engagement project that Bradford is collaborating on to bring arts education to immigrant communities and a display that highlights the global immigration crisis.

‘Early in our discussions with Mark Bradford,’ explains Iwan Wirth, ‘it was key to him that a big part of the exhibition would be dedicated to his social practice and he was looking for ways to define that here, where we have no previous history.’ Bradford initiated a new social engagement project collaborating with PILA Global to bring arts education to immigrant communities and a display that highlights the global immigration crisis. The artist led an art education residency with students from l’Escola d’Art de Menorca, who created site-specific wall paintings of maps. The educational program running from August to October provides regular activities engaging children, families, and schools in collaborative and hands-on activities.

‘Menorca is rich in history, heritage and culture, and this new art center can help place the island on the contemporary art world map,’ says Mar Rescalvo Pons, director of Hauser & Wirth Menorca. ‘We have been overwhelmed by the enthusiasm of the local community, and are collaborating with several local initiatives to foster connections.’

‘We have been overwhelmed by the enthusiasm of the local community, and are collaborating with several local initiatives to foster connections.’—Mar Rescalvo Pons 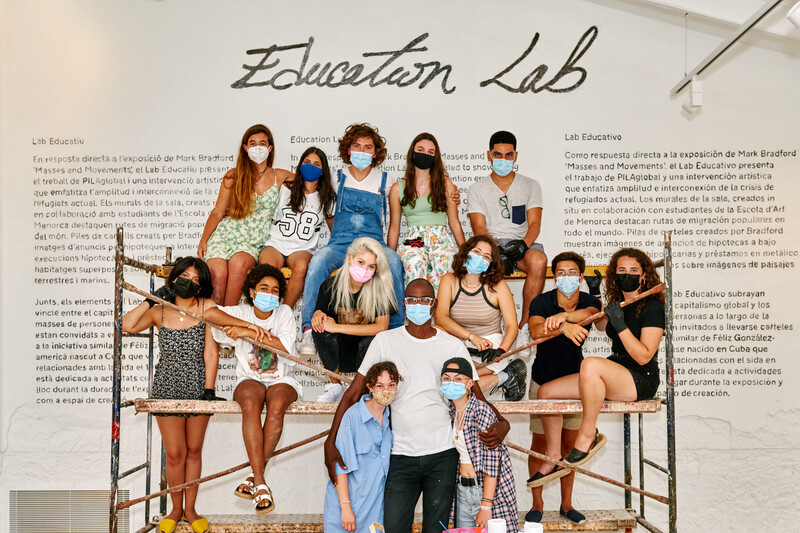 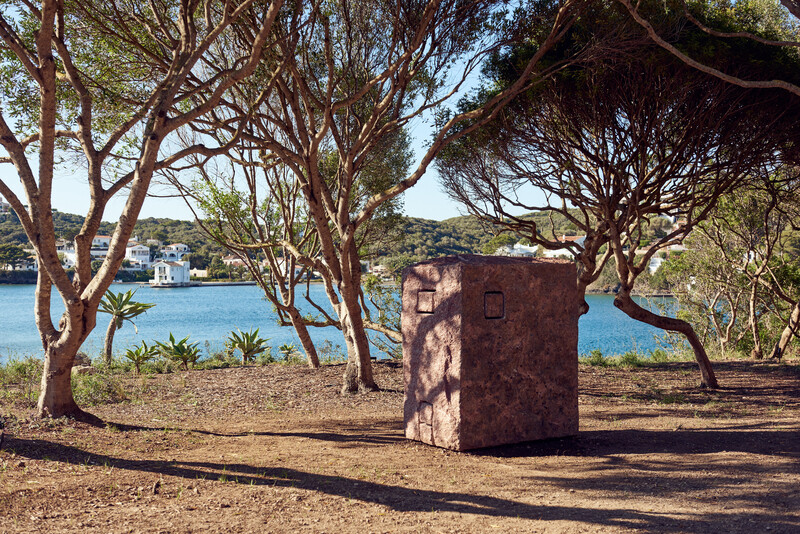 Menorca is a UNESCO Biosphere Reserve and, in the interest of protecting the unique natural environment of its location, we have partnered with the Menorca Preservation Fund. We support the NGO’s strategic lines of action, which consist in raising funds and distributing them to local projects that preserve the natural environment of Menorca.

Environmental sustainability measures of the art center include rain-water collection protocols, creation of a water plant to reuse water for ground irrigation, reverse osmosis water treatment, and energy efficient climate control for the buildings. As part of our gallery-wide environmental sustainability plan to reduce emissions by 50% before 2030, carbon budgets are developed for each exhibition to improve transparency. 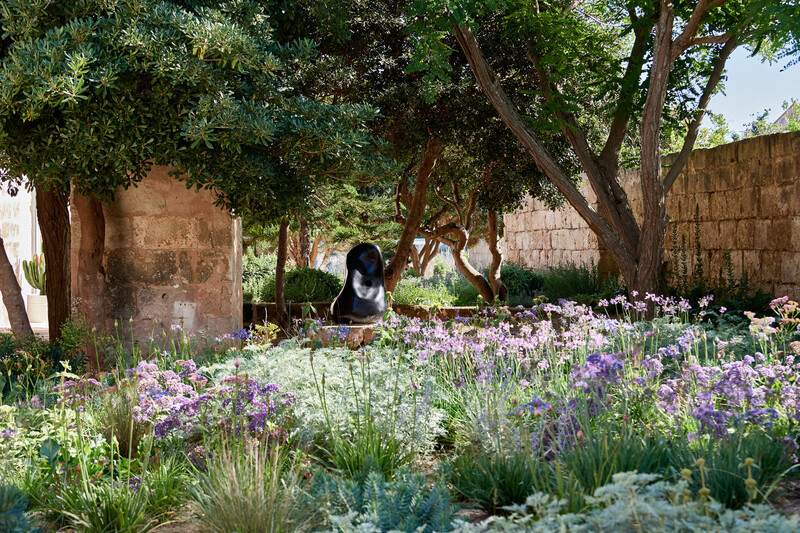 Piet Oudolf’s garden at Hauser & Wirth Menorca runs alongside the gallery buildings and is divided into two main borders. In the midst of Illa del Rei’s wildlife, the acclaimed landscape designer has applied his perennial planting scheme to a Mediterranean context. ‘When I first visited Menorca, I was inspired by how periods of flowering spread throughout the year, which makes the garden interesting at all seasons,’ explains Piet Oudolf. ‘I am most interested in the structure of plants, and used perennials adapted to the climate to create a garden rich in shape and textures.’

Oudolf uses a matrix of graceful low growing grasses, from which a great variety of flowers, euphorbias and bright shrubs emerge. Working in collaboration with Spanish designer Álvaro de la Rosa, Oudolf has created a sustainable garden that enhances the ever-changing experience of the Mediterranean landscape. 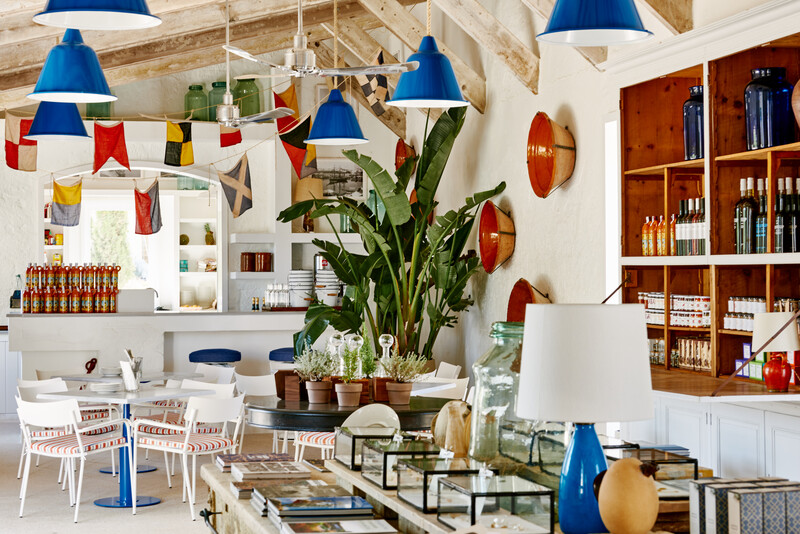 Inside the gallery shop and restaurant. Photo: Daniel Schäfer 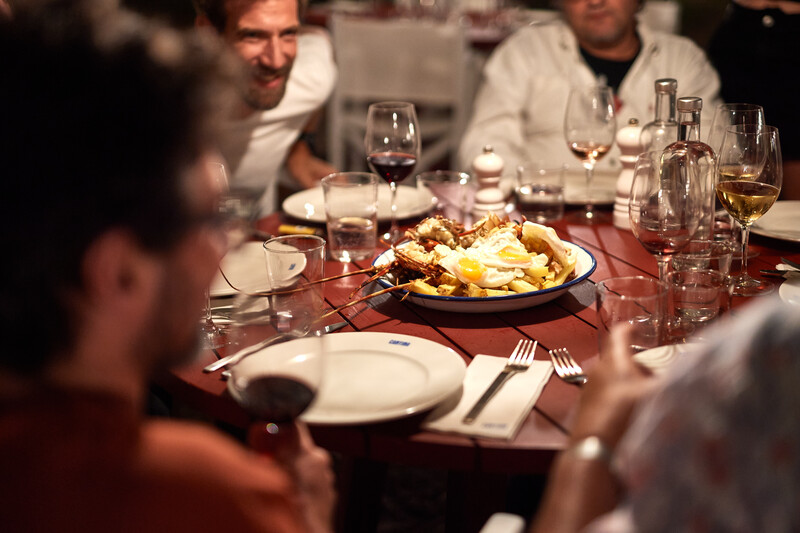 Cantina is the restaurant at Hauser & Wirth Menorca, with a focus on sharing, sustainability and local produce. The gallery shop is found in the same building, presenting art publications and Menorcan crafts.

The restaurant is run by local vineyard and restaurant Binifadet. Its founder, Carlos Anglés, started producing wine for his friends and family in 1979, and in 2004 the cellar opened to the public. Binifadet is run by his son Luis Anglés and Patricia Menéndez, who share their passion for wine making and agricultural production on Menorca. ‘The concept of Cantina is that of a ‘sea bistro’. Mediterranean and fresh cuisine, with many references to Menorcan recipes and—most importantly—based on local produce,’ says Luis Anglés.

Plan your visit to Hauser & Wirth Menorca. Mark Bradford’s exhibition ‘Masses and Movements’ is on view until 31 October 2021.

Located in the port of Mahon in Menorca, our new art center on Isla del Rey will open on 19 July 2021. An exhibition...

Hauser & Wirth Menorca is an arts center planned to open on Isla del Rey, located in the port of Mahon in Menorca....

A Nest for Learning

We asked Lola Mercadal, Head of Front Desk at Hauser & Wirth Menorca, to tell us about the Education Lab, an...