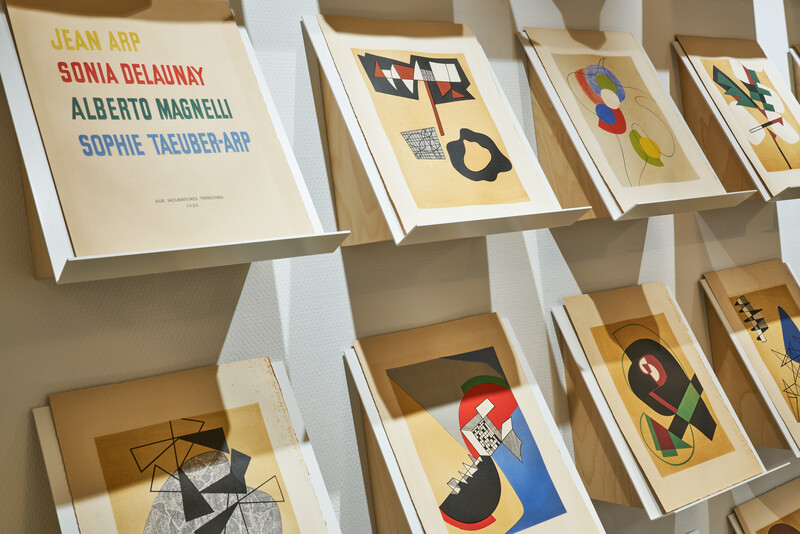 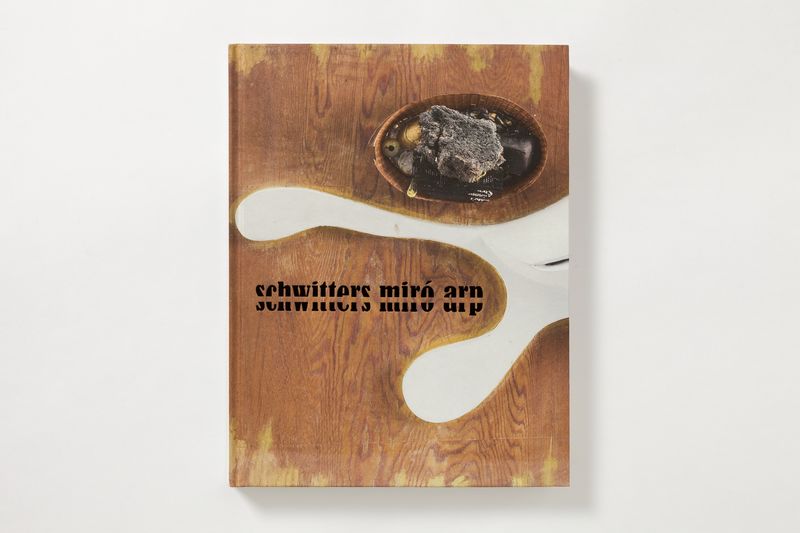 In a special presentation at Hauser & Wirth Publishers HQ, ‘Sophie Taeuber-Arp & Hans Arp: Cooperations – Collaborations’ brings together a selection of rare artist publications by Sophie Taeuber-Arp and Hans Arp from the collection of Daniel Segmüller and Ruth Seiler. The selected books and portfolios on view, made during the Dada movement onwards, celebrate artists coming together to forge new ideas in the face of challenging times. The collection features early examples of artistic collaboration in Dada Zurich with figures such as Tristan Tzara and Richard Huelsenbeck, as well as the work of celebrated modernist figures such as Max Ernst, Max Bill, Sonia Delaunay, and Alberto Magnelli. Original copies of Taeuber-Arp’s magazine ‘Plastique/Plastic’ are also on view in the presentation, which coincides with the major travelling retrospective ‘Sophie Taeuber-Arp: Living Abstraction’ at the Kunstmuseum Basel, organised in collaboration with the Tate Modern in London and the Museum of Modern Art in New York. The display in Zurich follows several collaborative projects with renowned collectors who share Hauser & Wirth Publishers’ passion for artists’ books, recognising their importance within artists’ practices and legacies.

Daniel Segmüller and Ruth Seiler have since the early 1980s built one of the most extensive collections of artists’ publications from the interwar period and have run an antiquarian bookshop in Lucerne for the past four decades. Together, they have amassed over 300 publications on and by Sophie Taeuber-Arp and Hans Arp and others of their contemporaries, which aptly capture the revolutionary spirit of Dada. For artists working in the period, the value of an artwork was not in the finished object, but in the joint act of making. Coming together in the aftermath of what they saw as a non-sensical war, printed matter was used by artists to communicate experimental ideas which rebelled against the status quo. Fusing text and image in radical ways, the publications on view highlight a breaking of artistic traditions and a blurring of authorship within the circles of the European avant-garde. 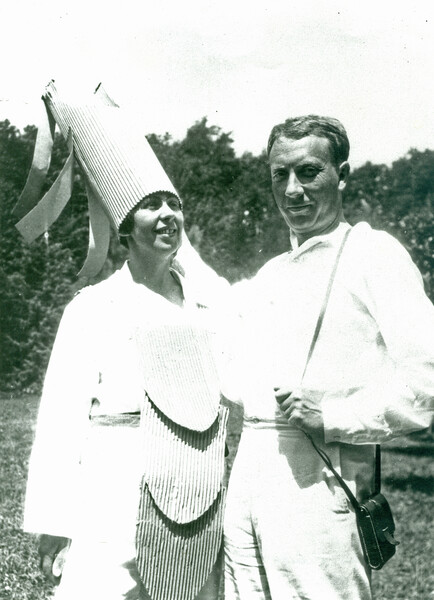 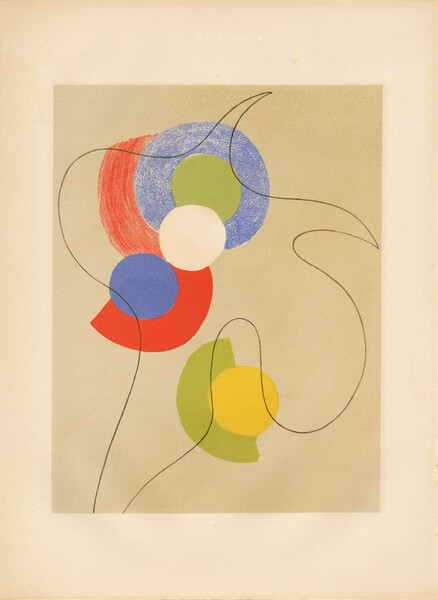 ‘Despite the ominous time, for me the work of that time is one of the most beautiful things I have experienced. All vanity, arrogance, rivalry was eliminated in it.’
—Hans Arp 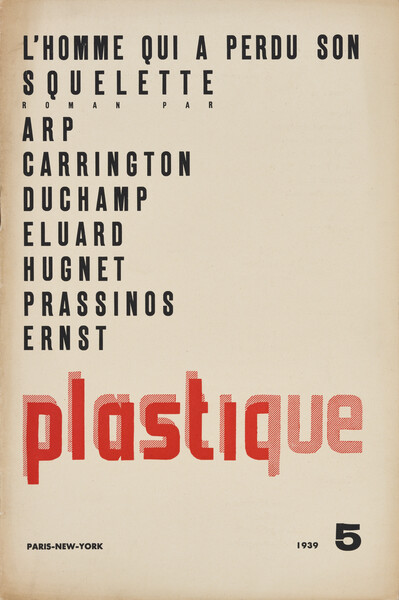 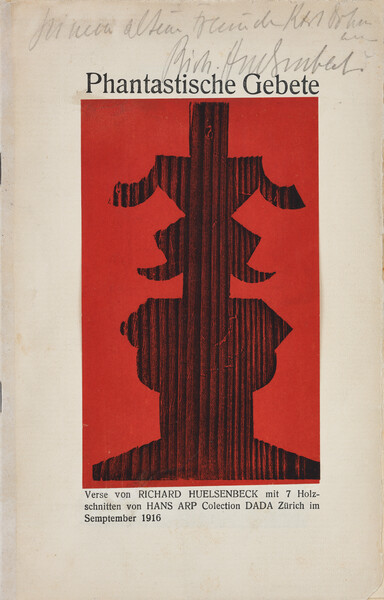 The display also includes some of the last works of the couple from 1941 – 42 made during their time in Grasse, German occupied Southern France, with Sonia Delaunay and Alberto Magnelli. This includes a portfolio of joint drawings titled ‘Album Grasse’, where the hand of the artist is layered and authorship becomes melded. The portfolio originally did not indicate the authors of each drawing, with the intention of leaving the viewer to guess which artists worked on each page. As writer Stefan Zweifel comments, ‘The works thus became statements against the excessive individualism of the time, in which nationalist mania and the cult of the leader devolved into a destructive power’. Arp later wrote about the experience: ‘We lived there for two years on this wonderful shore, surrounded by trembling crowns of light, waving flower fittings, sounding clouds, creating one of the most beautiful books. All kinds of collaboration have been tested in this book. It bears the names of the four as the title. Originally we planned to make the book appear anonymously. Despite the ominous time, for me the work of that time is one of the most beautiful things I have experienced. All vanity, arrogance, rivalry was eliminated in it.’ Their plan was to publish the portfolio of 10 lithograph prints in Grasse, before their lithographer was captured by the Gestapo. Sonia Delaunay saved these originals. After the war, she brought them to Paris and ‘Album Grasse’ was eventually printed in 1950.

‘Our Arp and Taeuber-Arp collection originated 33 years ago at a kitchen table on the Greek island of Ithaca,’ say the collectors Daniel Segmüller and Ruth Seiler . ‘It was there that we decided to establish an antiquarian bookshop together in Lucerne. Its name was to refer to our two specialties, literary modernism and its illustrated books. So, we christened the bookshop ‘Die Wolkenpumpe’ (The Cloud Pump)—after Hans Arp’s first volume of poetry. For us, his work represents the equal coexistence of literature and art, of word and image, as no other person does.’ 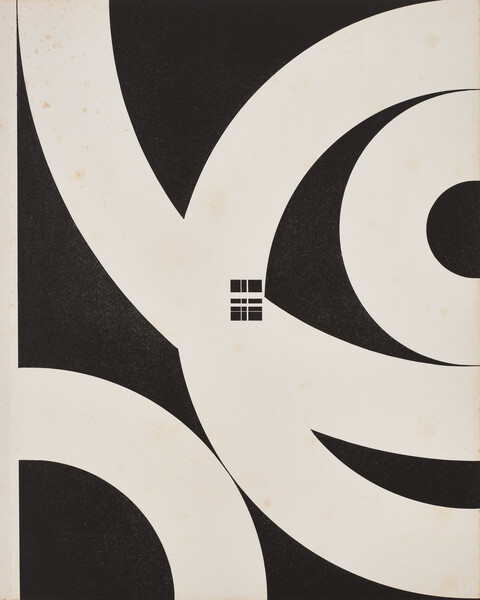 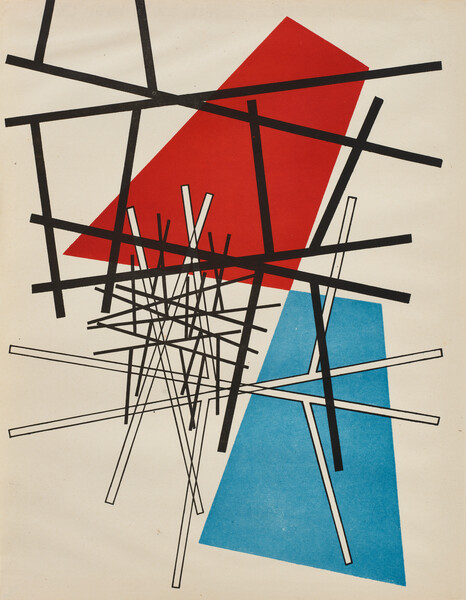 ‘Thus, the foundation stone of our collection was laid with the acquisition of the small Dada booklet ‘Die Wolkenpumpe’, published in 1920,’ Segmüller and Seiler explain. ‘This was soon followed by further purchases of books and illustrated works by the artist couple Hans Arp and Sophie Taeuber-Arp. In addition to our first collection started 40 years ago—namely books of concrete, visual and sound poetry—the Arp and Taeuber-Arp collection with its almost 400 prints reflects our love for experimental literature and art forms of the 20th century. We hope that this small exhibition with selected. objects from our collection will inspire the younger audience in particular to develop their own passion for collecting.’

On display at the Publishers Headquarters in Zurich from 9 April – 26 June 2021, ‘Sophie Taeuber-Arp & Hans Arp: Cooperations – Collaborations’ lends a fascinating insight into the partnerships that Sophie Taeuber-Arp and Hans Arp cultivated throughout their careers, and the importance of independent book-making during shifting social and political agendas in the early 20th Century. The presentation is accompanied by a conversation between Daniel Segmüller, Michaela Unterdörfer, Director of Publications at Hauser & Wirth Publishers, and Dada specialist and writer Stefan Zweifel, by Ursula magazine on hauserwirth.com.

The making of books is most often a collaborative effort: someone to write, to edit, to design, to print, to...

Over a period of more than sixty years, Arp produced an extraordinarily influential body of work that shifts fluidly...

From Dada to Geometric Abstraction, Sophie Taeuber-Arp’s radical approach to abstraction makes her one of the most...